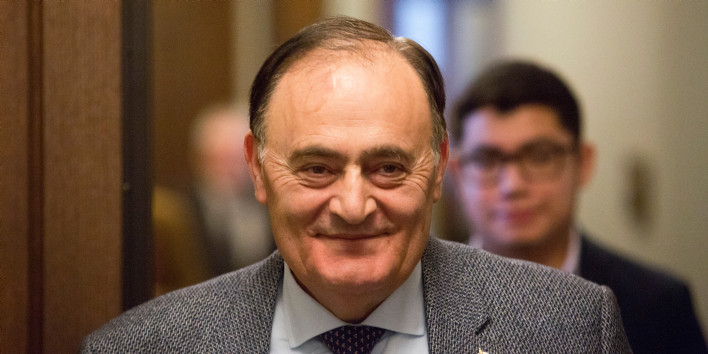 Liberal MP Fayçal El-Khoury pictured leaving the Liberal party caucus meeting in West Block in Ottawa on Dec. 11, 2019. In early 1976, Mr. El-Khoury headed to the Canadian Embassy in Beirut, which was closed. 'So I went from Beirut to Egypt and I applied in August 1976,' says Mr. El-Khoury, who was elected into office in 2015 and re-elected in 2019. The Hill Times photograph by Andrew Meade

Founder of the interparliamentary Canada-Lebanon Friendship Group, Liberal MP Fayçal El-Khoury has had a remarkable rise into Canadian politics, starting from his early life growing up in the northern province of Akkar in the small town of Charbila in Lebanon, to fleeing the beginnings of brutal civil war that consumed the country for a decade-and-a-half in 1976, to ultimately being elected as the MP for the Quebec riding of Laval-Les Îles in the 2015 federal election.

Alberta Premier Jason Kenney says the Liberals' Throne Speech committed to 'more policies that would invade provincial jurisdiction than I could count.'

The Throne Speech promised action on climate change like the country has never seen before, but some experts and politicians are skeptical the Liberal government can deliver.

While the conditions for Liberal longevity might not have been ripe, Liberal strategist Charles Bird says late former prime minister John Turner came to the leadership when 'he was already something of a living legend.'

Foreign policy focus in new session should be on China, U.S., and human rights, say Parliamentarians

'The No. 1 [foreign policy] priority is our relationship with the United States,' says Independent Senator Peter Boehm as the U.S. presidential election quickly approaches.

The rule changes includes a sunset clause, with the terms expiring Dec. 11.

‘Whatever it takes’: Trudeau says austerity not an option in the face of staggering job losses, health crisis

The speech did not promise a full-fledged budget, but said an update to the feds’ COVID-19 Economic Response plan would be coming this fall.

‘I wrote this memoir from the heart’: former Supreme Court chief justice wins Shaughnessy Cohen Prize for memoir, Truth Be Told, a ‘unique and tantalizing glimpse’ into top court

'Writing this book has brought me close to Canadians and the wonder of our national diversity. This prize is the icing on the amazing cake that has been my life': former Supreme Court chief justice Beverley McLachlin.

If Joe Biden wins the U.S. presidency, he will be constrained in the use of unilateral tariffs, say experts, while Donald Trump's re-election may leave Canada once again targeted by national security tariffs.

Lobbyists will also be keeping an eye on progress on the government's backlog of big-ticket legislation and regulatory reforms this session.
Trending Stories
Would you like to read
this notable, free story?