Minister of Finance Bill Morneau, pictured Feb. 19, 2020, at the House Finance Committee on the Hill. And here’s the thing. His huge wealth does not seem to have obscured his ability to understand the plight of the many little people who are hurting in this pandemic and who needed the big programs like CERB and CEWS or the more boutique life rafts that he threw out to gig workers, single mothers, students and stage hands. The Hill Times photograph by Andrew Meade

The Morneau Doctrine: to be continued or not?

Opinion|By Andrew Cardozo
Here's a list some of the things Bill Morneau has put into place over the last five years and you can read it either as the legacy of a finance minister who is about to exit, or as a list of his achievements.

The COVID-19 economic dislocation, climate emergency, and what governments must consider
Opinion|By Bill Henderson
Mitigation and a return to health will require fully functioning markets. We don't need a planned, centralized economy, but we do need vision and good government policy over an uncertain next decade.

Port plan enables national trade growth while protecting the environment
Opinion|By Duncan Wilson
If we don’t meet the increasing demand in container trade through the Port of Vancouver, there will be consequences for Canada’s economic progress.

Two lost weeks: one lost student program
Opinion|By Bruce Carson
The situation with WE Charity has raised questions about the prime minister's judgment, his inability to deal with ethical issues, and now the belief that such matters either do not apply to him.
COVID-19: once again, Indigenous communities are failed by North American governments
Opinion|By Emmanuelle Fahey

Engaging Indigenous leaders in the policy-making process is crucial for addressing othering practices that exacerbate these economic, social, and physical vulnerabilities.
There couldn’t be a better time than now to cancel the Safe Third Country Agreement
Opinion|By Jim Creskey

What this clear and powerful decision does is give everyone concerned, and especially the Liberals and Conservatives, an out.
Canada should be alarmed by Cold War rhetoric emerging from U.S.
Opinion|By Darren Touch

Unfortunately for Canada, the 'sleeping elephant' is awake. Every 'twitch and grunt' made will be felt by Canadians from coast to coast to coast. The ideological spiral between the two rivals will continue.
Pining for outside during an indoor summer
Opinion|By Lisa Van Dusen

Rose LeMay
Ottawa, we have a problem: reconciliation requires structural changes on the Hill
Indigenous inclusion, with enough numbers to be heard, is fundamental to any democratic structure, especially for one that claims to represent Indigenous peoples in Canada. This also applies to the civil service. We cannot say Canada’s political system and civil service are representative until Indigenous voices are heard and respected on every bill and in every debate and at every parliamentary and cabinet committee table. The upcoming generation of Indigenous leaders will not accept anything less; not a watered-down toothless pilot, and not a tearful apology to cover up lack of action. We are part of this country, and it’s time to change structures to respect our voices.

Scott Taylor
Trump wildly overstating the U.S. military retreat from Germany
For a man who has repeatedly claimed to be 'the most militaristic person ever,' Donald Trump seems to have little real grasp on how this defence stuff actually works.

Sheila Copps
On the eve of the vote, MacKay’s front-runner status is no longer secure
Erin O’Toole's fundraising in the second quarter was $1.24-million with Peter MacKay's raising $1.16-million. The difference is not that great, but the momentum shift definitely favours O’Toole. The Conservative voting system also lends itself to surprises.

Susan Riley
What else is happening while we worry about COVID?
As a political issue, the environment has definitely been downsized.

Phil Gurski
A rare insight into Canada’s most secretive spy agency
All in all, CSE's report is a very welcome peek behind the espionage curtain.
Opinion
Opinion|Robert Ghiz
Acceleration of digital economy is central to Canada’s future

The reality is that Canada does not need to make drastic changes to its wireless industry, which remains a bright spot and national success story, even during these challenging times.
Opinion|Tim Powers
Why is Morneau still the finance minister? Strategy over common sense

While the finance minister and the prime minister have apologized for their mistakes, those acts of contrition do not seem enough for the circumstances.
Opinion|Fahad Saeed Al Raqbani
Successful U.A.E. launch of mission to Mars a symbol of hope when needed the most

The U.A.E. and Canadian space agencies signed a Memorandum of Understanding regarding co-operation in the exploration and use of space for peaceful purposes in 2018.
Opinion|Winston Wen-yi Chen
China’s national security law aims to silence critics in Taiwan, too

As Taiwan also faces existential challenges from China, we see the value in standing in lockstep with the people of Hong Kong.
Opinion
Meeting the challenge of security cooperation in a COVID-19 world

It is essential that more pragmatically driven collectives of states come together to address both regional and global security challenges. Perhaps the sting of Canada’s loss will feel a little less painful.
Opinion|Greg McClinchey
Broader lessons to be learned from our quiet and off-the-side diplomacy

The approach has kept relationships strong on the Great Lakes and, in so doing, has bolstered their multi-billion-dollar economic impact, and maintained more than 240,000 Canadian jobs.
Opinion|Erica Ifill, Arezoo Najibzadeh
Trudeau government is getting a failing grade on supposed feminist bona fides

For a government that champions gender equality, it sure doesn’t take the concerns of one gender as seriously as another.
Opinion|Sara Anghel
Now is the time to invest in renewing Canada’s outdoor recreation infrastructure

The jobs and economic impact of these investments would be a great boon to all regions of Canada, including rural and remote and Indigenous communities.
Editorial
Opinion|Editorial

Letters to the editor

The 2015 Liberal election campaign not unlike a Copperfield show, masterfully executed in its illusionary progressivism: reader 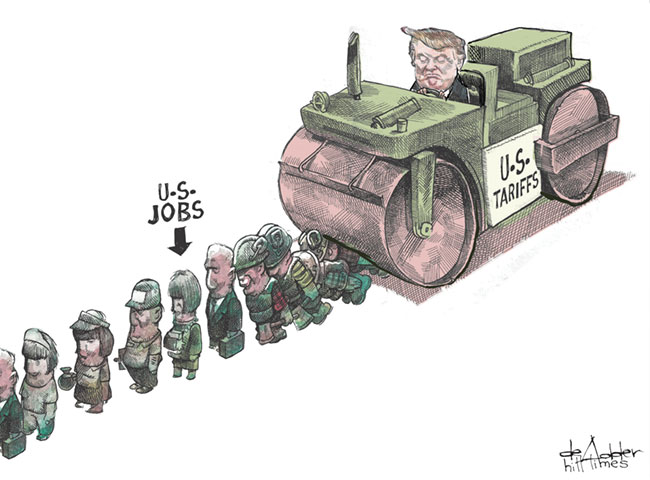 ‘Canada is warming at twice the rate of the global average. Is the government doing enough to combat climate change? Is your party offering anything powerful on that front?’

Erica Ifill
Trudeau wants us to believe he hasn’t done nothin’—and it’s an easy sell
We are amazed, but not amused by all the things you say that you'll do. Though much concerned but not involved with decisions that are made by you.

Gwynne Dyer
Meltdown in Lebanon
Popular anger was great even before the 2.75-kilotonne explosion last week. The currency has collapsed, most people’s savings have been wiped out, the country has defaulted on its debt, and there are no jobs for the young.

Gerry Nicholls
The NDP’s invisible problem
The Liberals have managed to stealthily degrade the NDP’s brand without anybody seeing it happen.

Tim Powers
Newfoundland and Labrador's new premier is one to watch
Furey’s greatest challenge will not be enthusiasm or passion, but rather the provincial political system that has rarely rewarded disruption and provides benefits for ward keepers who do not shake things up.

Michael Harris
Government by bureaucrats may be reality, but it cries out for reform
Since the PM admits that cabinet practised zero due diligence before handing half a billion dollars to WE Charity, and relied totally on the advice of bureaucrats, who were those bureaucrats, and exactly what investigation of this charity’s fitness for the job was undertaken? Make it public.
Opinion
Opinion|Scott Taylor
Vandalism of private property was not a hate crime against Nazis

That’s right folks, as hard as it is to fathom, there is actually a monument on Canadian soil that pays tribute to Hitler’s SS troops.
Opinion|Bianca Mugyenyi
Canadian government’s supporting Trump’s efforts to starve Venezuelans

Ottawa has not criticized the devastating U.S. sanctions. Quite the opposite. It has egged the bully on. Canada has imposed four rounds of its own unilateral sanctions on Venezuela, writes Bianca Mugyenyi.
Opinion|Lisa Van Dusen
Good trouble: Lewis, Mandela, and authentic power

John Lewis embodied a form of resistance that changed history, and a relationship to power that makes today’s so-called ‘strongmen’ look weak.
Opinion|Les Whittington
Where are the alarm bells after the armed incursion at the PM’s residence?

This lack of official information after such an incident would not be tolerated in any other so-called advanced country; here we live with it.
Opinion|Tshweu Moleme
Canada should keep Security Council seat campaign alive: reach out to Africa; use Mulroney; be authentic

Any leader in the Prime Minister's Office should be keeping the UN Security Council seat election file alive and ready to pass it on, in the case of a change in political leadership in the country.
Opinion|Christyn Cianfarani
Why it is time for smart protectionism

Put simply, Canadian governments have a responsibility to practise smart protectionism where the risks to Canadians’ personal security and national security are high.
Opinion|Melissa Matlow
We must curb the wildlife trade to prevent future pandemics

While China needs to be encouraged to do more, other countries need to step up to the plate. Wildlife markets exist around the world. This is a global problem, requiring a global solution.
Opinion|Trevin Stratton and Ulrike Bahr-Gedalia
How COVID-19 changed Canada’s conversation on digital infrastructure

Much has changed in the past few months, and in many ways we have all been forced to adapt. Let’s embrace this opportunity to change by laying the groundwork of a digital infrastructure that works for every Canadian.
The Hill Times in print

David Crane
Last thing the world needs is a new Cold War, this time with China
Canada should support coherent, long-term strategy, and reject Trump’s alternative. This should be a key message from the House of Commons committee. If its work is to have value, it should be hearing witnesses and looking at how a Canadian framework would work within a more enlightened superpower U.S.-China understanding. It mustn’t make this a lost opportunity.

Les Whittington
Deepening COVID-19 impact raises the stakes for Canada’s future choices
As the epidemic reshapes everything, it’s time for the country to put aside traditional convictions and economic frameworks and try to pull together to build a future better suited to a changing, endangered world.

Andrew Caddell
Racism poisons Canada's future
It is counterproductive to discriminate against anyone on the basis of racial, religious, or ethnic background, not only because it denies them opportunity, but because it denies Canada their talents.

Joe Jordan
Hey Parliament, how about we take this online?
If it's done right, many of Parliament's functions could be moved online. But the opposition parties need to be involved in, and committed to, every aspect of this walk toward virtualization, it won’t work otherwise.
Your group subscription includes premium access to Politics This Morning briefing.
© 2020 Hill Times Publishing   Contact Us   Work With Us   Advertise   Privacy   Terms of Service   Subscriptions