Leonard Tilley: unlikely saviour of Confederation, ‘rare example of a politician who knew when not to talk’

Samuel Leonard Tilley, a Saint John druggist and leader of the New Brunswick Liberal Party, became the unlikely saviour of Confederation in 1866. 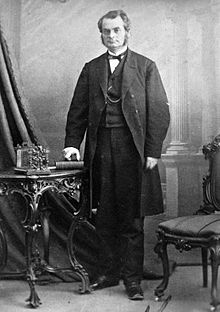 Sir Samuel Leonard Tilley was one of the Fathers of Confederation and the lieutenant governor of New Brunswick. Photograph courtesy of Wikipedia

OTTAWA—When British North American colonial leaders gathered at Québec City in 1864 to shape the details of the Confederation project, one man stood out, in historian P.B. Waite’s words, as “the rare example of a politician who knew when not to talk.” This was Samuel Leonard Tilley, a Saint John druggist and leader of the New Brunswick Liberal Party. Waite noted that he was “not a frequent speaker at the Quebec Conference, but one always clear and to the point.” Yet it was the self-effacing Tilley who, with the timely help of some external forces, became the unlikely saviour of Confederation in 1866.

Christian Leuprecht, a professor at the Royal Military College of Canada, says just because the forces are 'capable,' the CAF is not and should not be viewed as the 'optimal provider of emergency assistance.'

'It's clear that everybody's already tilting in toward the next president,' said Mr. Heyman, who served as the U.S. envoy to Canada from 2014 to 2017.

But NDP MP Matthew Green says 'there just seems to be ongoing reluctance for this government to go beyond the aesthetics of big ticket announcements.'

The bill leaves unanswered questions, including why the government wants consumer data, and how much businesses will be able to do with that data without consumers' permission, says John Lawford.

Canada could be on track to hit upwards of 60,000 new infections in December, unless individuals modify their behaviour and restrictions are tightened.

Feds could receive 6 million vaccine doses by March 2021, but details around distribution in works

The possibility of Canada receiving six million vaccine doses by the end of March 2021 comes with a 'big if,' says Iain Stewart, the newly named president of the Public Health Agency of Canada.

No system in place to verify if mail-in ballots counted in official tally, says Elections Canada

Elections Canada is exploring the idea of installing secure drop-off boxes for mail-in ballots.
Trending Stories
Would you like to read
this notable, free story?