Alexander Galt and Confederation as an economic union

The British Columbia and Quebec governments are currently threatening to use provincial regulatory powers to prevent the construction of inter-provincial energy pipelines across their borders to the East and West coasts. This resistance to national infrastructure projects and reluctance to promote the free flow of goods and services between the provinces and territories would have shocked and disappointed the Fathers of Confederation, particularly the minister of finance for the then Province of Canada, Alexander Tilloch Galt of Sherbrooke. 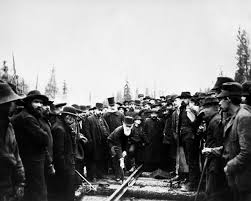 CPR railroad financier Donald Smith, pictured at Craigellachie, B.C. at 9:22 a.m. on Nov. 7, 1885, driving the ceremonial final spike driven into the Canadian Pacific Railway (CPR), marking the end of a saga of natural disasters, financial crises, and even rebellion that plagued Canada's first transcontinental railroad from its beginning. Photograph courtesy of Canadian Encyclopedia

OTTAWA—Originally, Confederation was meant to be not just a political but an economic union. The purpose of this economic union was the creation of an integrated East-West national economy. And 150 years later this remains an ideal rather than an achievement.

The government said it is committed to ‘maintaining a focused, safe and reliable air transport network for these communities.’

‘It is going to blow a hole in the government’s legislative agenda,’ says Liberal MP John McKay.
Trending Stories
Would you like to read
this notable, free story?