A must-read for anyone interested in the Senate is Constitutional Pariah: Reference re Senate Reform and the Future of Parliament (UBC Press), by Emmett Macfarlane. Grounded in the Supreme Court’s reference decision in 2014 about electing Senators and setting term limits, Constitutional Pariah branches into a detailed examination of the role of the Senate and the fallout of that landmark decision, writes Alex Marland. Image courtesy of Pixabay

Political scientists authored many interesting books about Canadian politics in 2021. Here’s a sample published by three of Canada’s largest academic publishers: University of British Columbia Press (UBC Press), University of Toronto Press (UTP), and McGill-Queen’s University Press (MQUP). I am going to begin and conclude this synthesis with women and Canadian political books, for reasons that I will explain later.

Women, Power, and Political Representation: Canadian and Comparative Perspectives (UTP) looks at challenges that women face in the political arena, ranging from cabinet to elections to gender quotas in legislatures. An intriguing chapter is “Black Women’s Hair Matters,” by Nadia Brown. The book is edited by Roosmarijn de Geus, Erin Tolley, Elizabeth Goodyear-Grant and Peter Loewen. 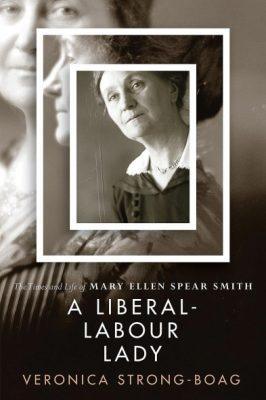 I am quite interested in reading A Liberal-Labour Lady: The Times and Life of Mary Ellen Spear Smith (UBC Press) by Veronica Strong-Boag. When the pandemic forced professors to teach remotely, I spruced up my lecture materials for a Canadian executive-level government course at Memorial University by researching news stories from the early 20th century about Smith. She was British Columbia’s first woman MLA, but really stands out for being the first woman to be a cabinet minister in Canada and in fact the entire Commonwealth. A Liberal-Labour Lady promises to introduce this important yet under-appreciated Canadian political figure to a broader audience.

Brooke Jeffrey offers up another inside account of Liberal Party politics in her latest book Road to Redemption: The Liberal Party of Canada, 2006–2019 (UTP). It is a follow-up, of sorts, to her earlier book that documented Liberal Party infighting during the Chrétien-Martin era. This time she relies a bit more on media reports to provide a chronology of events under the leadership of Stéphane Dion, Michael Ignatieff, Bob Rae, and Justin Trudeau. 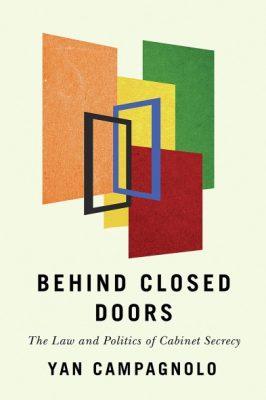 Another book that caught my eye is Behind Closed Doors: The Law and Politics of Cabinet Secrecy (UBC Press), by Yan Campagnolo. Naturally, those who follow Canadian politics are bound to be interested in what goes on in cabinet meetings. Yet anyone who studies politics knows that it is exceptionally difficult to get information about those forums because of the legalities of cabinet confidentiality. Behind Closed Doors adds to limited public knowledge about executive decision-making by examining the overzealous secrecy in Canadian government, and makes a case for more transparency. 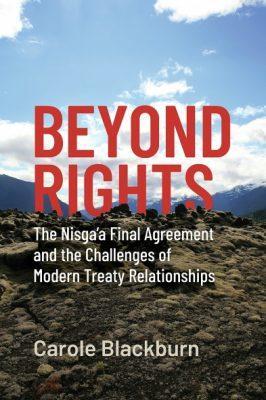 Beyond Rights: The Nisga’a Final Agreement and the Challenges of Modern Treaty Relationships, by Carole Blackburn, UBC Press, 202 pp., $89.95.

An intriguing book about Indigenous rights and treaty making is Beyond Rights: The Nisg̱a’a Final Agreement and the Challenges of Modern Treaty Relationships (UBC Press), by Carole Blackburn. This is a case study of the Nisg̱a’a treaty, which was an agreement between the Nisga’a people, the Government of British Columbia, and the federal government took that took effect in 2000. Beyond Rights documents the legal and political path that the Nisga’a nation forged to achieve this landmark agreement.

It used to be said that only in Canada will you find a book about federalism at an airport. Perhaps one such tome destined for weary travellers is The Daily Plebiscite: Federalism, Nationalism, and Canada (UTP), by David Cameron and edited by Robert Vipon. The book weaves together Cameron’s observations and musings about Canadian federalism and constitutional negotiations from the latter 20th century. The Daily Plebiscite will interest those looking for a historical journey through a period of heated national unity discussions. Another new book about federalism is Open Federalism Revisited: Regional and Federal Dynamics in the Harper Era (UTP), edited by James Farney and Julie Simmons. The collection features chapters by political scientists from across Canada about regional differences and institutional changes during the Harper years. I’m looking forward to the chapter titled “Stephen Harper’s PMO Style: Partisan Managerialism,” by Jonathan Craft and Anna Esselment.

Back when I was an undergraduate student at Carleton University in the 1990s, I took a course in Canadian federalism that included some heavy conversation about the Royal Commission on Dominion–Provincial Relations, which was constituted in the late 1930s. I am struck that this body’s work is the subject of The Rowell-Sirois Commission and the Remaking of Canadian Federalism (UBC Press), by Robert Wardhaugh and Barry Ferguson. It deals with the origins of fiscal federalism and how the provinces tapped into the federal government’s spending power.

On the topic of royal commissions, an intriguing work is The Fate of Canada: F. R. Scott’s Journal of the Royal Commission on Bilingualism and Biculturalism, 1963–1971 (MQUP), edited by Graham Fraser. The Bi and Bi Commission conducted a pivotal inquiry into the presence of the French language and culture in Canadian society, and laid the groundwork for the federal government becoming officially bilingual. What is so curious about The Fate of Canada is that it is shaped around extracts of the journal of poet F.R. Scott who took notes about the commission’s work. 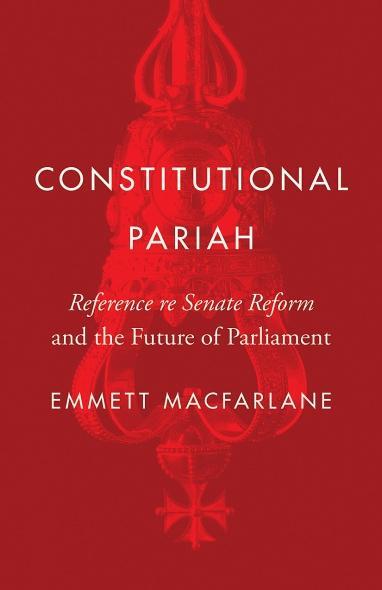 A must-read for anyone interested in the Senate is Constitutional Pariah: Reference re Senate Reform and the Future of Parliament (UBC Press), by Emmett Macfarlane. Grounded in the Supreme Court’s reference decision in 2014 about electing Senators and setting term limits, Constitutional Pariah branches into a detailed examination of the role of the Senate and the fallout of that landmark decision.

A special word about Keeping Canada Running: Infrastructure and the Future of Governance in a Pandemic World (MQUP), by Bruce Doern, Christopher Stoney, and Robert Hilton. The book looks at Canadian infrastructure projects, the pandemic “build back better” mantra of the federal government and the future of infrastructure in an era of climate change. Sadly, author and Carleton University professor Chris Stoney passed away this month, leaving behind a large circle of students, colleagues, and friends. Keeping Canada Running will be part of his scholarly legacy.

In academia, scholars sometimes honour a distinguished colleague by publishing a collection of essays in their friend’s honour. This is known as a Festschrift. Across Boundaries: Essays in Honour of Robert A. Young (MQUP) edited by André Blais, Cristine de Clercy, Anna Lennox Esselment, and Ronald Wintrobe, pays homage to the late University of Western Ontario professor. Across Boundaries brings together scholars looking at how succession happens, how governments engage with each other, and how politics intersect with the economy. Among the contributors is former Liberal leader and minister Stéphane Dion.

Those interested in public administration will want to consider Take a Number: How Citizens’ Encounters with Government Shape Political Engagement (MQUP) by Elisabeth Gidengil. The author is renowned for her meticulous assessment of Canadian elections data. Big City Elections in Canada (UTP) draws on public opinion data from elections in eight municipalities to illuminate voting behaviour in Canadian municipal elections. Editors Jack Lucas and Michael McGregor have assembled a book wherein each co-authored chapter is a case study of a recent municipal contest. Likewise, Electing a Mega-Mayor: Toronto 2014, by McGregor, Aaron Moore, and Laura Stephenson uses survey data to understand municipal voters. 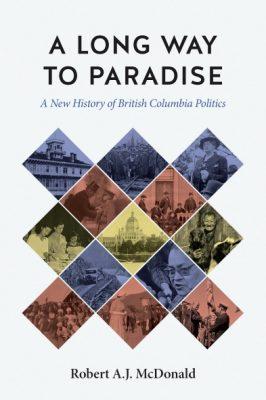 Some new books about regional politics in Canada are worthy of mention. A Long Way to Paradise: A New History of British Columbia Politics by Robert McDonald explores the sometimes wacky nature of BC politics from 1871-1972. Neoliberal Parliamentarism: The Decline of Parliament at the Ontario Legislature, by Tom McDowell argues that since the 1980s democracy has weakened in Ontario due to neoliberal rules and approaches.

On a final note, I had hoped to prepare a summary of academic books that would feature an equal balance of men and women authors. I was struck that men appear to have published books disproportionately more in 2021. If that impression is right, it might be further evidence of women experiencing more challenges than their male counterparts during the pandemic. Academic presses might want to consider this when encouraging Canadian scholars to submit book proposals.

Alex Marland is a professor at Memorial University of Newfoundland and author of a number of books, including the award-winning, Whipped: Party Discipline in Canada.

Alexa McDonough, who died on Jan. 15 at the age of 77, was the second woman to lead the federal NDP from 1995 through 2006; a time, her former colleagues recall, in which women in politics faced much sexism.

NDP MP Lori Idlout says the Liberals need to hold companies accountable. ‘Our communities can’t continue to be disregarded when the profit is gone and we’re left to clean up the mess.'
Trending Stories
Would you like to read
this notable, free story?