The West Block on Parliament Hill. The Hill Times photograph by Andrew Meade

Parliament Hill has seen a number of security breaches over the years. In April 1989, an armed man hijacked a Greyhound bus, drove it to Parliament Hill, and sat there on the front lawn with hostages inside the bus for six hours before the incident ended without any casualties. In November 1995, an intruder armed with a jackknife slipped into 24 Sussex Drive while the prime minister and his wife slept. Aline Chrétien woke up, locked the bedroom, woke up Jean Chrétien, who grabbed an Inuit carving for protection, and called the police. No one was hurt. In 1997, a man tried to crash his Jeep into the doors of Centre Block after driving it up the steps of the Parliament Buildings. In 2002, a grenade was delivered to the Prime Minister’s Office.

Expat voting increased 206 per cent between the 2015 and 2019 federal elections. But as a new conservative group works to get more expats registered, there’s no sign of a liberal equivalent.

The details gathered in a recent report will inform ACFN’s negotiations with the federal government, including calls for an official apology and reparations, and laying the groundwork for reconciliation in the future.

‘We have to be ready to begin and able to pivot quickly’: tourism marketing arm looks inward to keep the dream alive

While domestic-focused tourism marketing is the play for the short-term, Destination Canada will have to pivot back to its usual international audience, and to do that, Canada could use a rebrand, marketers say. 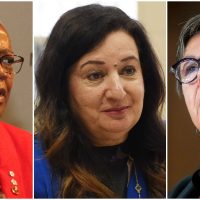 There is a 'clear lack of accountability on the part of Corrections for the way they manage the prisons,' says Sen. Kim Pate following Human Rights Committee’s four-and-a-half-year study.

Independent Brampton Centre MP Ramesh Sangha, who was kicked out of the Liberal caucus and is not running for re-election, has opened up a hotly contested seat in Brampton Centre.

Unifor launched a major advertising campaign Monday going after the Conservative Party leader, while another group with labour support is running attack ads in suburbs where the Conservatives are vulnerable.

With MPs gone for their summer break, Senators would not be able to amend Bill C-6 and see it pass it before the fall, said Senator Scott Tannas.
Trending Stories
Would you like to read
this notable, free story?