Political pressure is the most effective tool we have—and this is especially true within a minority government situation.

Four years ago this week, the Special Committee on Electoral Reform published its final report. Following months of citizen and expert input, the committee’s report recommended the implementation of a proportional voting system for federal elections. But this key 2015 campaign trail promise was not to be kept; Justin Trudeau ignored the report, and months later through a cabinet shuffle, removed electoral reform from the mandate of the new minister for democratic institutions. Ignoring the committee’s citizen- and expert-informed recommendation, he stated that “a clear preference for a new electoral system, let alone a consensus, [had] not emerged.” Alas, 2015 was not to be the last election conducted under first past the post.

Experts in social media and digital politics say that Pierre Poilievre is seeking to bypass the media and talk directly to voters with his extensive use of online video on platforms like YouTube.

Too soon to gauge staying power of ‘freedom’ theme in Conservative politics, now at fore of leadership race, say strategists

The political rhetoric surrounding 'freedom' isn't necessarily new, says Yan Plante, but the pandemic put an even greater emphasis on it and has a chance to grow deeper roots depending on who wins the Conservative race.

B.C. is jumping from 43 to 44 ridings, and the province’s proposed new electoral district is being carved out of its southern interior, between Vernon and Kelowna.

Parliamentarians were told they did not properly consult the disabled community, and urged to pause expansion to persons with mental illnesses as sole underlying condition in 2023.

Brown rips Poilievre over ‘slow and selective’ response to Buffalo shooting, as politicians of all stripes denounce ‘white replacement theory’

'Any and all racism is evil and must be stopped,' says Conservative MP and party leadership hopeful Pierre Poilievre. 'Any individual who engages in racism is personally responsible for his behaviour.'

Now, negotiations begin with Zeidler Architecture Inc. and David Chipperfield Architects to finalize the contract by fall, with construction expected to begin within 18 to 24 months. 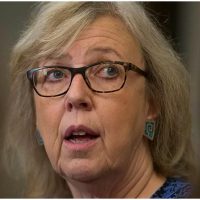 The government says it plans to appeal the May 10 Alberta Court of Appeal decision that found the Impact Assessment Act is unconstitutional because it infringes on provincial jurisdiction.

Fearing Russian aggression, Finland and Sweden will likely apply for NATO membership. While Canada supports the membership of these countries, it needs to step up its own contributions, especially in the Arctic: experts.
Trending Stories
Would you like to read
this notable, free story?