Heritage was selected as the department for this project because it includes a good representation of the kinds of complexities that an HR and pay system is going to have to grapple with, according to Digital Government Minister Joyce Murray. 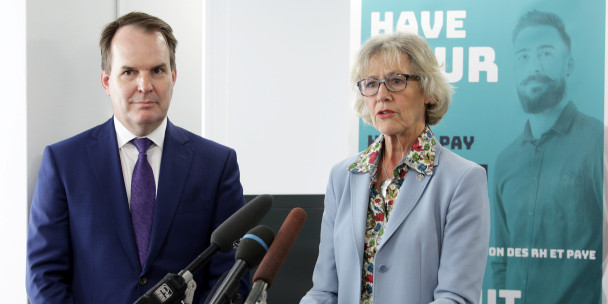 Liberal MP Steve MacKinnon, pictured left on June 12, 2019, and Digital Government Minister Joyce Murray, right, pictured speaking at a Next Generation HR and Pay System. Ms. Murray says she wants 'people in the public service who are interested in this to continue to feel that they can be engaged in the discussion.' The Hill Times photograph by Sam Garcia

The Department of Heritage has been selected for the first exploratory phase of the Next Generation HR and Pay project—or NextGen, for short—which is meant to eventually replace the problem-plagued Phoenix pay system that has left thousands of public servants overpaid, under paid, or not paid at all.

Lambropoulos’ comments could be used against Grits in next election, say Liberal insiders, pollsters, and MPs

Quebecers are more upset with Liberal MP Emmanuella Lambropoulos’ comments about decline of French in Quebec than they were with the WE Charity scandal, says one Quebec Liberal insider.

Race to replace MP Kent as Thornhill’s Conservative on the ballot a chance to ‘bring Conservatives back into the fold’, sign of ‘generational shift’, say early candidates

Two names have emerged stating their intentions of running for the party’s nomination in the riding so far, including long-time Conservative staffer Melissa Lantsman as well as Progressive Conservative MPP Gila Martow.

During a banner year for home sales in Canada despite the economic downturn associated with the COVID-19 pandemic, both MPs and experts are watching the country's housing supply carefully in the months and years to come.

The aerospace industry is a big contributor to GDP and employs hundreds of thousands of Canadians. Many of Canada's biggest competitors in the space, like France, have doled out billions in sector specific relief.

Ottawa projects three million Canadians could be vaccinated by March 2021

Though Canada no longer has the manufacturing ability to scale up production, the two most promising vaccines are produced using a new technology called mRNA, which is not widely available.

In 2019, the PBO projected the cost of 15 CSC frigates to be nearly $70-billion. The defence department says the ships are still projected to cost between $56- and $60-billion.
Trending Stories
Would you like to read
this notable, free story?