‘Those are his pyjamas’: O’Toole opts for suit and tie to catch thrilling Raptors playoff game

Plus, NDP MP Niki Ashton and longtime party staffer George Soule celebrate their birthdays by appealing to voters and donors. 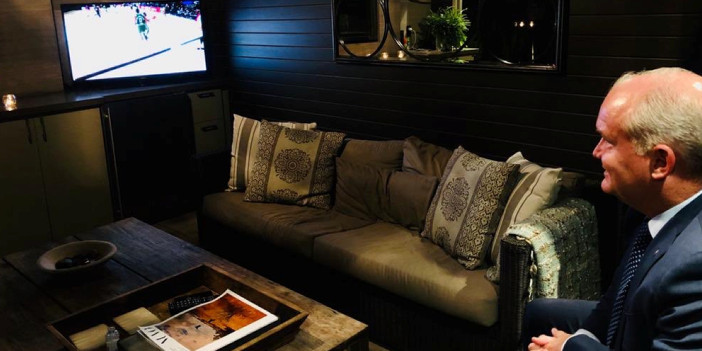 Many Twitter users poked fun at Conservative Leader Erin O'Toole's choice of attire when he tweeted a photo of himself watching a Raptors game last week wearing a suit and tie. Some thought he was channelling his inner professional basketball team owner vibe. Photograph courtesy of Erin O'Toole's Twitter

New Conservative Leader Erin O’Toole was among the millions of Canadians who caught the Raptors bug on Sept. 9, and watched a thrilling, double overtime Game 6 victory against the Boston Celtics from the comfort of a swanky looking setup. Did I say it was thrilling? In normal times, politicos in Ottawa would have watched the game in a crowded, noisy bar, and when there’s only one basketball squad for the entire country, which just happens to be the defending championship team, rallying behind said team is nearly impossible to avoid.

Alberta Premier Jason Kenney says the Liberals' Throne Speech committed to 'more policies that would invade provincial jurisdiction than I could count.'

The Throne Speech promised action on climate change like the country has never seen before, but some experts and politicians are skeptical the Liberal government can deliver.

While the conditions for Liberal longevity might not have been ripe, Liberal strategist Charles Bird says late former prime minister John Turner came to the leadership when 'he was already something of a living legend.'

Foreign policy focus in new session should be on China, U.S., and human rights, say Parliamentarians

'The No. 1 [foreign policy] priority is our relationship with the United States,' says Independent Senator Peter Boehm as the U.S. presidential election quickly approaches.

The rule changes includes a sunset clause, with the terms expiring Dec. 11.

‘Whatever it takes’: Trudeau says austerity not an option in the face of staggering job losses, health crisis

The speech did not promise a full-fledged budget, but said an update to the feds’ COVID-19 Economic Response plan would be coming this fall.

‘I wrote this memoir from the heart’: former Supreme Court chief justice wins Shaughnessy Cohen Prize for memoir, Truth Be Told, a ‘unique and tantalizing glimpse’ into top court

'Writing this book has brought me close to Canadians and the wonder of our national diversity. This prize is the icing on the amazing cake that has been my life': former Supreme Court chief justice Beverley McLachlin.

If Joe Biden wins the U.S. presidency, he will be constrained in the use of unilateral tariffs, say experts, while Donald Trump's re-election may leave Canada once again targeted by national security tariffs.

Lobbyists will also be keeping an eye on progress on the government's backlog of big-ticket legislation and regulatory reforms this session.
Trending Stories
Would you like to read
this notable, free story?