O’Toole should set sights on attacking Trudeau, while Bergen could poke at Freeland, say strategists

'In the end, any election will be a referendum on [Justin Trudeau] and nobody else. When you have a leader who is so overwhelming and charismatic, that’s going to be what the electorate will vote on,' says Conservative strategist John Penner. 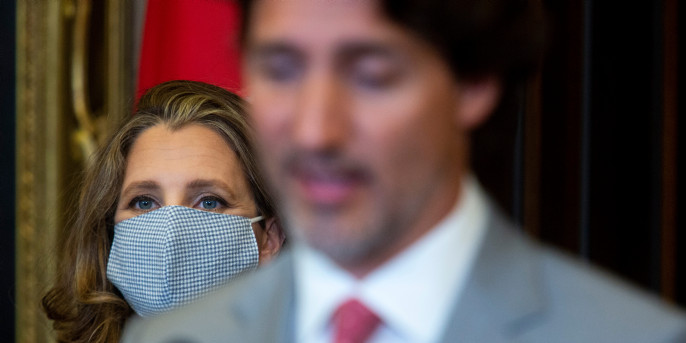 Deputy Prime Minister Chrystia Freeland, pictured on Aug. 18 as Prime Minister Justin Trudeau announces her new finance post, should not bear the brunt of opposition attacks from the Conservatives, say some strategists. Under the leadership of new Conservative Leader Erin O'Toole, the party should instead target Mr. Trudeau. The Hill Times photograph by Andrew Meade

Attacking Deputy Prime Minister Chrystia Freeland will be an uphill battle for the Conservatives, who should focus their attention on poking at the prime minister’s credibility, given a possible fall election could be a “referendum” on Justin Trudeau, say some political observers.

After vowing to hire about 350 new workers and extend the contracts of roughly 160 existing staff members last summer, teams will be simultaneously ‘up and running’ in the next quarter, the feds say.

Filipino-Canadians could rally voters in closely-contested ridings across the country, say the founders of the Filipino Canadian Political Association.

With the most anticipated budget in recent Canadian history just around the corner, MPs from both sides of the aisle are calling for desperately needed infrastructure funding for long-term care homes across the country.

If an election were held today, the Liberals would win most of the 13 suburban ridings decided by the closest margins in the last election, say pollsters.

In appointing her successor as parliamentary secretary, Celina Caesar-Chavannes says the prime minister is continuing a ‘pattern of behaviour.’

There were a number of resolutions that were immediately shot down by grassroots members, including one urging the government to create a program for student-loan recipients to reduce their debt through volunteer work.

Remote staffing can be a ‘game changer’ to bring in diversity of skills and organizers for key roles are among the lessons learned by U.S. Democratic organizers during a pandemic election.

As the only Black female MP in Parliament, the Liberals' Marci Ien says it was equally important for her to demonstrate to young people that she had a place in politics.
Trending Stories
Would you like to read
this notable, free story?