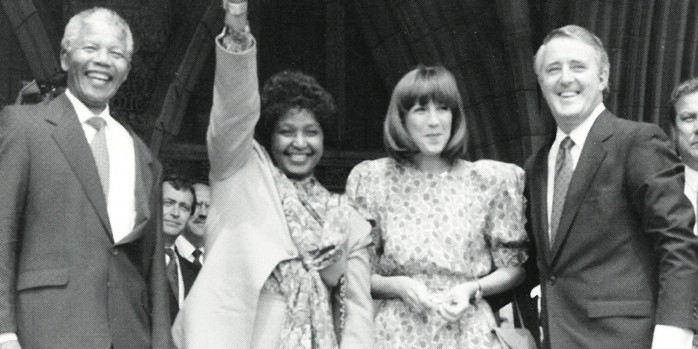 Nelson and Winnie Mandela are pictured with Mila and Brian Mulroney on Parliament Hill on June 18, 1990. It was Mr. Mandela's first visit to Canada, four months after being released from 27 years in jail. Last week marked the 30th anniversary of the anti-apartheid advocate's visit. The Hill Times photograph by Jim Creskey

Current Parliamentarians and former Hillites marked the 30th anniversary of Nelson Mandela’s first historic visit to Canada in 1990 last week. Mandela, the iconic and late anti-apartheid leader, became the first foreign leader to hold an Order of Canada in 2000 and the first living person to receive an honorary Canadian citizenship a year later. His visit came just four months after being released from 27 years in prison, and about four years before he would go on to become the president of South Africa.

Feds’ fiscal snapshot puts deficit at more than $340-billion, with promise of an update in fall

Finance Minister Bill Morneau says a decision on whether the government intends to release a full budget in the fall will be dependent on efforts at managing the pandemic and its economic fallout.

Liberal MP John McKay says there will be 'incursions and intrusions and aggressive actions taken increasingly in the Arctic' by Russia.
Trending Stories
Would you like to read
this notable, free story?

DON'T MISS OUT.
We are offering a free subscription during the pandemic
© 2020 Hill Times Publishing   Contact Us   Work With Us   Advertise   Privacy   Terms of Service   Subscriptions