Women in politics: every party should have a few

It is early days, there may be other candidates stepping up, but at the moment it looks as if that prize will go to yet another ambitious, confident and aggressive white male politician straight from central casting. History repeats itself; old power dynamics endure.

Conservative MP Marilyn Gladu, pictured, is so far the only high-profile woman running for the Conservative Party's leadership. The Hill Times photograph by Andrew Meade
CHELSEA, QUE.—Will the time ever come when every leadership race does not require a “woman” candidate, primarily to make the party look inclusive? In other words, will women in politics, and women in leadership, ever become so routine as to be unremarkable—candidates judged on their merits, not as part of a political sub-category, not as tokens of their party’s virtuous ambitions?
Maybe, but we’re not there yet. In fact, in some areas, we appear to be retreating.
The still-unfolding Conservative leadership race offers mixed signals, but, overall, suggests that women are still outsiders at the heart of political power. So far, only one woman has put her name forward, Conservative MP for Sarnia-Lambton, Marilyn Gladu. Notwithstanding an impressive career as a professional engineer for Dow Chemical, an engaging forthrightness and a proven ability to work across party lines, no one, but no one, expects her to win.
She is a relative newcomer, first elected in 2015. She hasn’t had a particularly high profile as her party’s science critic; indeed, she and her Liberal counterpart, former science minister Kirsty Duncan, agreed privately to work together instead of shouting at one another across the aisle. She has shown an independent streak, but in quiet ways—criticizing the Harper government’s decision to eliminate the long-form census and supporting Liberal moves to unmuzzle the federal scientists silenced by Harper’s factotums.
She has favoured the House with the odd poem and showed up at a 2016 Conservative convention in Vancouver dressed as the Grim Reaper—a highly unusual attempt to get her colleagues to shed the “gloom and doom” of their recent defeat. She has a black belt in Tae Kwon Do and two grown daughters.
And her professional resumé clearly surpasses that of some of her higher-profile rivals (notably Pierre Poilievre, until he dropped out of the race last week) and that of the former leader, Andrew Scheer: she was director of engineering for Suncor, chair of the Canadian Society of Chemical Engineers, a member of the dean’s engineering advisory committee at Queen’s University and, during her time with Dow, she travelled the world overseeing the company’s 250 operations. 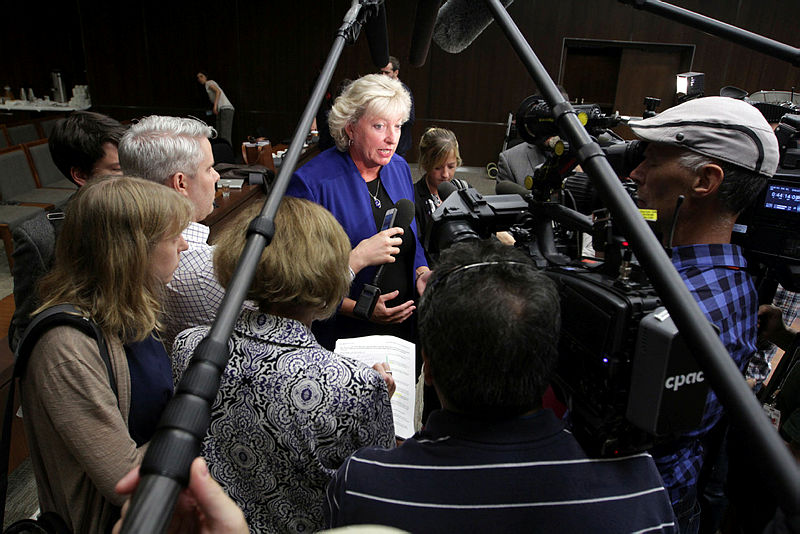 Conservative MP Marilyn Gladu, pictured on Sept. 12, 2017, in a scrum after a House Health Committee meeting. The Hill Times photograph by Andrew Meade

She may yet dazzle. Or she may—like a Belinda Stronach without the family money—fizzle. She may be running primarily to enhance her profile as many second-tier candidates do. She may not be able to raise the $300,000 and find the 3000 cross-Canada signatures by March 25 to enable her to stay in the race. That could leave the party with no women candidates which would be awkward, but hardly unprecedented.