Crown Prince Mohammed bin Salman may go on for a while, despite the disaster of his military intervention in Yemen, his fruitless blockade of Qatar, and even this ugly murder. He wouldn’t be the only killer in power. But the bloom is definitely off this particular rose.

Former Saudi dissident and Washington Post columnist Jamal Khashoggi was killed on Oct. 2 after he went to the Saudi consulate in Istanbul. Saudi Arabia has changed its story a few times, but it fired five top officials and arrested 18 Saudis it says were connected to the killing. Photograph courtesy of April Brady/Project on Middle East Democracy
LONDON, U.K.—How odd. Turkish President Recep Tayyip Erdogan sends an audio recording of the murder of journalist Jamal Khashoggi in the Saudi Arabian consulate in Istanbul to the governments of all Turkey’s major NATO allies, and the only one that gets it is Canada.
What happened to the copies that Erdogan sent to the United States, France, the United Kingdom and Germany? Lost in the mailroom, no doubt, or maybe just lying unopened on somebody’s desk. Or perhaps the Turks just didn’t put enough stamps on the packages.
“We gave them the tapes,” said Erdogan on Nov. 10. “They’ve also listened to the conversation, they know it.” But still not a word out of Washington or London acknowledging that they have heard the recordings, and French Foreign Minister Jean-Yves Le Drian denied that France has received a copy.
When asked if that meant Erdogan was lying, Le Drian replied: “It means that he has a political game to play in these circumstances.” Like most Western politicians and diplomats, he is desperate to avoid calling out Saudi Arabia’s de facto ruler, Crown Prince Mohammed bin Salman, as a murderer. 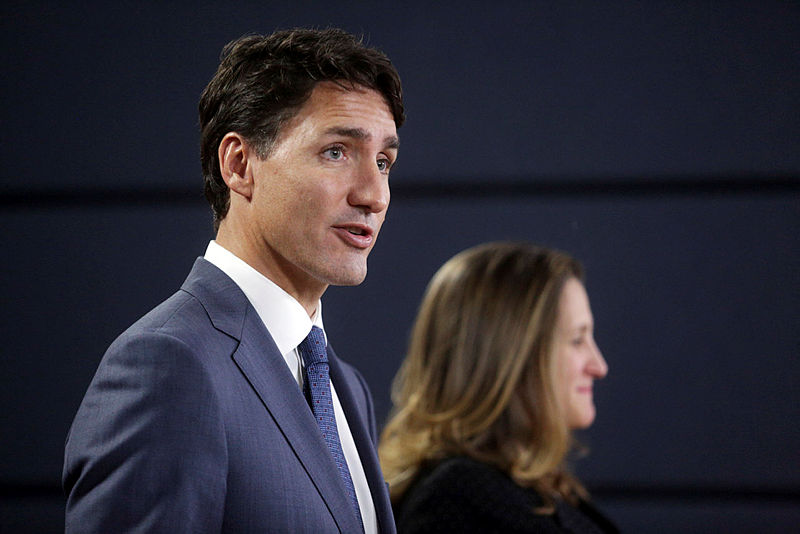 Prime Minister Justin Trudeau said last week that Canadian intelligence has the recording and he is well aware of what is on it. In fact, Canadian intelligence agencies have been working very closely with Turkey on the murder investigation, and Canada is ‘in discussions with our like-minded allies as to the next steps with regard Saudi Arabia.’ The Hill Times photograph by Andrew Meade

The French have a highly profitable commercial relationship with the oil-rich kingdom, mostly selling it arms, and they don’t want to acknowledge the evidence on the recording (which may directly implicate the Crown prince) because it could jeopardize that trade.