Canada's former governor general Michaëlle Jean is vying for a second term leading the International Organisation of La Francophonie, but will face stiff competition from a France-backed Rwandan candidate when a decision is made at the Oct. 11-12 Francophonie leaders' summit in Armenia. The Hill Times file photograph

Michaëlle Jean’s chances at a second term leading the International Organisation of La Francophonie have disappeared or are “very, very slim,” say observers, amid fallout from spending controversies that have shaken support for her even in Canada, her home country.

Winning support in the closed-door and consensus-based vote during the Francophonie leaders’ summit Oct. 11 to 12 in Armenia was already an uphill battle. Ms. Jean is up against a Rwandan candidate backed by France, a powerful member of the OIF. The Haitian-Canadian is also perceived to have a lack of influence among African nations, which represent the largest voting bloc of the 84 member states and governments in the OIF.

“Her problem with spending has coloured her bid,” said Jocelyn Coulon, a former policy adviser to Stéphane Dion when he was foreign affairs minister, but “the geopolitics [of] France in Africa has taken over this.

“France wants to expand and consolidate its presence in Africa,” and as the biggest funder of the OIF, that has sway. Also potentially affecting the vote is the desire among African countries to see one of their own lead an international organization, he said, noting Ms. Jean’s opposition has the backing of heavyweights like Morocco, Senegal, Côte d’Ivoire, the Democratic Republic of Congo, and Egypt.

“It says a lot about the loss of influence of Canada in Africa,” he added, noting Prime Minister Justin Trudeau’s (Papineau, Que.) only trip was back in 2016.

“That’s just perhaps the excuse for France withdrawing its support [of] Michaëlle Jean,” he said. But, more importantly, France has always used the organization “as instrument for its foreign policy orientation in general,” using it “as a force multiplier in Africa.”

“It’s more about consensus-building,” and in that context especially given Ms. Jean’s mixed approval in Canada, her chances are “very, very slim, to say the least.”

“This is unheard of,” and an “anti-African practice,” said Mr. de Kerckhove, who served as then-prime minister Stephen Harper’s sherpa at the Francophonie from 2006 to 2008. He also pointed to Rwanda’s troubled past and its decision a decade ago to prioritize English as an official language as points against assured ascension.

That’s still not enough to shake the desire for an African candidate over the Haitian-born Canadian, said Mr. Coulon.

In private circles, some are discussing an agreement to split the four-year secretary-general term into two, Mr. de Kerckhove said, though Mr. Coulon hadn’t heard that as an option in his discussions, while Prof. Massie suggested it’s unlikely, and a “no-go” for many countries.

“I would like her to have four years, but I think they’ll split two-two,” said Mr. de Kerckhove, who considers Ms. Jean a friend but agrees she’s had some failings and a bit of a “queen-like attitude” that didn’t go over well among members.

“The intentions are there, but it’s a lot of fluff. And she thinks she has the means for her action, when in fact she’s got a tiny budget,” he said of the former governor general, “so she replaced action with speeches, and that’s where the disconnect between reality and desire appears so glaringly.”

But, he said media coverage has been “overdone” on the issue of Ms. Jean’s alleged excess. Her lack of influence has more to do with her natural disadvantage as an outsider, without the same connection and access to African heads of state her predecessors had.

In the spring, Canada’s French media reported extensively on the controversy surrounding her post, uncovering questionable spending, like the use of $500,000 to renovate her official residence in Paris, and $20,000 to buy a piano. There was also the four-day stay at the Waldorf Astoria for $50,000, a youth project that cost $1-million and was way over budget, and the charge her husband had a chauffeur and car paid for, though he has no official OIF role.

Mélanie Joly took over the Francophonie file after a July cabinet shuffle. The Hill Times photograph by Andrew Meade

Without addressing specific reports, Ms. Jean said this constituted a “smear” campaign with “scurrilous and specious accusations,” in June 5 Globe and Mail op-ed where she reaffirmed her commitment to lead the organization and defended her record.

Regarding the renovations, she said both Canadian and OIF officials said upgrades were needed to make the residence habitable, and that the work was regularly inspected by the Canadian Embassy in France, which owns the apartment.

She also said “the OIF has implemented rigorous transparency mechanisms validated by an internal audit process, external auditors, and the Finance and Administrative Commission as part of regular accountability reports to its member states and governments.”

“Our government values international organizations and we believe it is important for Canada to have Canadians in leadership roles in such organizations which promote our values, including within the OIF,” he said by email in response to questions. “On transparency, we have been very clear: we expect that organizations receiving funding from the Government of Canada use it with the utmost care and transparency,”

Better defining La Francophonie’s “core mandate,” and improving its functioning and transparency were listed as priorities in the August mandate letter to Ms. Joly (Ahuntsic-Cartierville, Que.) when she took over the file from International Development Minister Marie-Claude Bibeau (Compton-Stanstead, Que.).

That represented a demotion of the file to a junior minister, said Mr. Coulon and Prof. Massie, who both questioned the ferocity of Canada’s campaign on Ms. Jean’s behalf. The way the Liberals pushed her bid “was lukewarm at best, and with caveats [suggesting] that they’re not…[going] to war to defend her,” said Prof. Massie, while Mr. Coulon described it as “very discreet.” Mr. Ghio said he couldn’t comment on what Canada is doing to campaign. Mr. Trudeau is expected to travel to Armenia for the Francophonie summit and a bilateral visit from Oct. 11 to 13. Canada is the organization’s second-biggest donor.

In June and July, before a major African Union summit, Mr. Trudeau made a number of calls to African leaders with a stake in the OIF,  including Madagascar, Côte d’Ivoire, Benin, Cameroon, Niger, and Senegal. 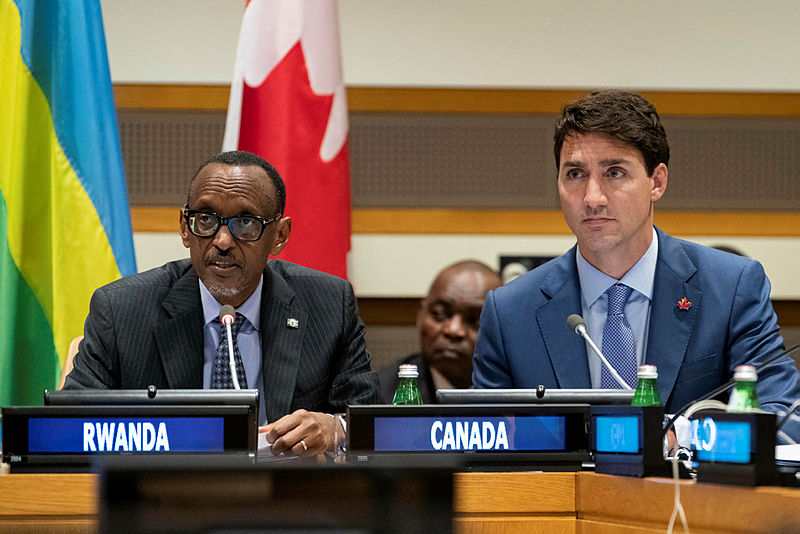 “We have to put the interest of Canadians first instead of blindly supporting someone because it’s someone from Canada,” said Mr. Blaney, noting that Canada, under the Liberals, has yet to be accountable for “legitimate questions” and must do so to maintain the credibility of the organization.

Back in May, when France came out for Rwanda, colleague Gérard Deltell (Louis-Saint-Laurent, Que.) called her “an embarrassment to Canada.”

Before Monday’s election, Quebec’s potential premiers were lukewarm in their support, reported the Canadian Press. The province’s new leader, Coalition Avenir Quebec’s François Legault was the least supportive, declining to endorse her and saying he would “reserve his decision” until later, creating the potential for a divided Canadian delegation, which includes national representatives as well as for Quebec and New Brunswick.

Bloc Québécois spokesman Antoni Gilbert said none of the party’s MPs were available for an interview Friday or Monday and said comment by email wasn’t possible. In May, Bloc MP Monique Pauzé (Repentigny, Que.) (who at the time was sitting outside the Bloc caucus with several other former Bloc MPs) spoke dismissively of Ms. Jean’s lifestyle, said that the OIF is “sinking into insignificance,” and asked when the government would withdraw its support for her.

He didn’t offer clear support for her.

“It is obvious that we would like to show solidarity toward a Quebecer and a Canadian on the international stage, but Michaëlle Jean will have to explain and demonstrate what steps she will take in the future to restore the public’s confidence,” said Mr. Aubin (Trois-Rivières, Que.) by email.

A tough, bipartisan American approach on China could put additional pressure on Canada, but questions loom over whether Joe Biden's campaign rhetoric will be met with White House action.

With the two sides having been at the bargaining table for almost two years following the expiry of the most recent collective agreement, strike votes are scheduled to run from Feb. 11 to 24.

Even as the commission said the regulator should have the power to impose fines or administrative penalties as a deterrent against a pattern of non-compliance, it warned against Germany’s 'reactive' approach.

The party assigned six new critics in the lead-in to the House’s return after previously stripping MP Niki Ashton of all her critic duties for travelling abroad to tend to a sick relative.

No replacing need for in-person diplomacy, say chairs, as work of interparliamentary groups goes on

The 13 interparliamentary associations haven't been able to travel or host foreign delegations since last March, but their work has continued virtually with some technical issues.

The OAG, which typically has a staff of between 575 and 600 employees, has now surpassed the 700 mark after it began recruiting additional reinforcements to help manage the COVID workload.

The Jan. 18 online meeting was a regular monthly meeting aimed to update MPs and riding volunteers about 'party’s tools and resources to stay connected with Canadians in virtual ways that respect public health guidelines,' says Braeden Caley, senior director, communication with the Liberal Party
Trending Stories
Would you like to read
this notable, free story?