One suspect fled the hotel with two bags of expensive equipment, and was chased by an Environment and Climate Change Canada official. In the end, the thieves escaped and the equipment was recorded as a loss.

Security camera stills showing two suspects in the lobby of the Hilton Hotel in Bonn, Germany, on the morning of Nov. 15. ECCC personnel travelling as part of Canada's delegation to COP23 were victims of a $30,000 theft. Photographs courtesy of Bonn police

The social media team that tailed Environment Minister Catherine McKenna to the United Nations Climate Change Conference in Germany in November 2017 were victims of a hotel lobby theft involving $30,000 in camera and electronic equipment.

According to documents and emails obtained by The Hill Times through an access to information request, a thief made off with two bags containing $30,300.95 worth of equipment, stolen from the lobby of the Hilton Hotel in downtown Bonn, Germany.

The immediate incident report states that on the morning of Nov. 15 an assailant took the bags and then ran out of building and onto the street.

The person responsible for safekeeping the bags, the head of Environment and Climate Change Canada’s (ECCC) communications team, witnessed the theft and attempted to chase the thief as the suspect ran out of the hotel, but was unable to retrieve the bags.

A Bonn police press release dated Nov. 20 stated that two people were suspected to have been involved in the theft. It says that at a moment when the bags were left unattended, one of the two male suspects grabbed a backpack and suitcase belonging to a 51-year-old victim. Both suspects then left the hotel together, with the victim attempting to give chase.

The two suspects then boarded a roadside vehicle and drove away. The vehicle, a dark Toyota, had the country code “GB” for Great Britain. The Bonn police press release includes photos of the suspects idling beside the unattended bags located nearby the hotel’s large front revolving door.

Files show the theft left members of ECCC’s social media team scrambling to file incident reports with the department’s security division, Bonn police, the RCMP, and the Canadian diplomatic offices in the hours after the theft.

However, emails suggest the department’s social media team did their due diligence by immediately reporting the theft, drafting a thorough list of stolen equipment, and checking for potential security compromises.

In the end, the risk to security was deemed low. ECCC personnel had to change the passwords of social media accounts, but the stolen computer was not connected to ECCC servers. Through Google accounts, the device was also locked.

“Pls ask … to change all the social media passwords. The laptop has some channels preloaded. Just in case. I don’t know if someone can get in the laptop…” wrote the head of the social media contingent in an email, four hours after the incident occurred.

“The list of equipment is extensive, but the good news is that no Protected or Classified information had been compromised,” wrote another ECCC official on the evening of Nov. 15. 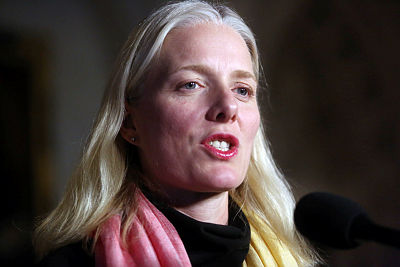 Environment Minister Catherine McKenna, pictured in the House foyer in early November 2017. She led the Canadian delegation to COP23. The Hill Times photograph by Andrew Meade

Another email from that day indicates the only files that remained are “older files of video that was shot in the past and has since gone public.”

During her time as minister, Ms. McKenna has prioritized social media and online communication, occasionally to the ire of opposition MPs who have questioned the choice of spending.

ECCC contracted a French photojournalist to take pictures of the minister at the COP21 meeting in Paris in 2015, at a cost of $6,792.91, reported CTV News.

Between November 2015 and August 2016, more than $17,000 was spent photographing the minister and her staff. Conservative environment ministers had spent at least $99,000 on photography over eight years, her office told CTV News.

“As someone who uses social media actively, personally I think there are ways that we can reduce costs,” Ms. McKenna told reporters in Ottawa at the time, as reported by the network. “We need to be mindful of the cost to taxpayers.”

In an email response to The Hill Times, ECCC spokesperson Jenn Gearey confirmed the theft had occurred, saying that the department nevertheless takes the security of government assets seriously. She wrote that the stolen equipment has not been recovered, and no classified or protected information was lost in the incident.

She said ECCC immediately notified Bonn Police, the RCMP in Canada and Berlin, and the Canadian embassy in Germany following the theft, which occurred as COP23 ended, thus not affecting Ms. McKenna’s communications work.

“The stolen equipment has been reported as a loss of public property due to an offence or other illegal act. It will be published in the 2017-18 Public Accounts of Canada by Public Services and Procurement Canada,” Ms. Gearey added.

According to the departmental write-off form, dated Dec. 20, recommended actions to prevent recurrence include to “keep luggage close,” “lock luggage with locking luggage straps,” and to “use colourful bags that are easier to recognize.”

On Jan. 9, an ECCC administrative official inquired by email with the department’s Assets, Inventory Control, and Mail Division about possible reimbursements. However, the official was told by a division official that to her knowledge “when assets are purchased, there are no further warranties or insurance at the time of purchase.”

The official relayed the message back to a member of the department communications team, saying “we won’t be getting money back from the stolen equipment—we just need to buy new [equipment] with our current budget.”

The head of ECCC’s social media team has since left the department, relocating elsewhere within the public service. Ms. Gearey said the individual’s departure was not related to the incident.

According to the most recent Public Accounts available, covering 2016-17, ECCC reported a total of $165,536 in “losses of public property due to an offence or other illegal act.” Overall, a total estimated loss of $6,829,808 in public property was reported by the federal government for the fiscal year.

Mauril and Me
A collection of personal reflections and anecdotes in encounters and impacts by colleagues, community leaders and individuals.