From tiny agency of six to department-in-the-making: elevating the Status of Women

There are pros and cons to having a department focused on women’s issues, says Melanee Thomas, professor at the University of Calgary. If the agency operates in a silo, it’s easy to dismiss its existence. But on the other hand, having it around could help usher in incremental change.

If the Liberal government introduces legislation in the fall to turn the Status of Women from an agency to a department, Status of Women Minister Maryam Monsef, pictured June 5, 2018, at the National Press Theatre, would be the first to head it. The Hill Times file photo by Andrew Meade

Despite the Trudeau government’s efforts to brand itself as feminist and to transform  Status of Women Canada from an agency to a full department, critics say it’s an open question whether Ottawa has elevated the portfolio of the Status of Women to a place where it has a similar level of prestige to other files.

Even as Ottawa looks to turn the agency’s status into an official department, pulling it from the auspices of Heritage Canada, some say they are skeptical of whether rhetoric will translate into action, while recognizing that there have been a series of incremental wins throughout the agency’s existence.

“Until that ministry starts to generate some legislation, and stand up in the House to defend legislation like virtually every other minister does, then I think that [its level of influence] will continue to be a question,” said NDP MP Sheila Malcolmson (Nanaimo-Ladysmith, B.C.). “The government’s inclination is to talk a good game about gender equality, but not to follow it up with lasting change.”

The agency hasn’t shepherded its own legislation in this Parliament so far. For example, the pay-equity bill will be led by the federal labour minister, not by status of women minister, Ms. Malcolmson said.

In an interview with The Hill Times, Status of Women Minister Maryam Monsef (Peterborough-Kawartha, Ont.) said the change in the agency’s designation will ensure it’s “no longer at the mercy of the whims and values of the governing party.”

For Ms. Monsef, that means having a full minister dedicated to the file and affirming the role it has historically played in funding women’s organizations that engage in service delivery and advocacy. Its capacity to play that part was diminished, she said, because of cuts made to the operating budget and the move to disqualify groups involved in offering services while also advocating for policy changes. 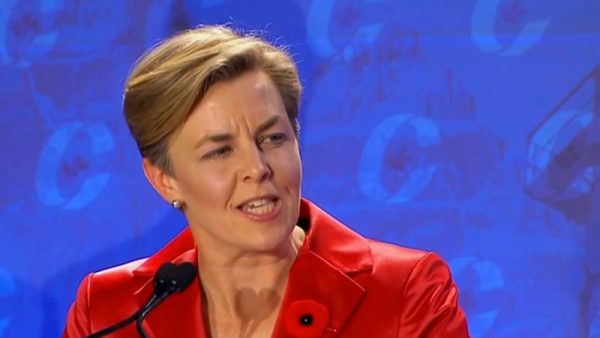 Conservative MP Kellie Leitch says that as minister during the Harper government, she worked to strengthen Canada’s profile internationally on women’s rights. Screenshot courtesy of CPAC

Status of Women has come a long way: from its establishment as an agency of six in 1971, based on recommendations from the Royal Commission on the Status of Women, to upcoming legislation in the fall that would make it a full department.

Conservative MP Kellie Leitch (Simcoe-Grey, Ont.), who served as minister on the file during the Harper government’s final years in office, said it was under prime minister Stephen Harper’s leadership that the post changed from minister of state to minister.

“I don’t think the elevation of the issues is directly related to whether or not there was one other funding or one other person [on the file],” Ms. Leitch said of the cuts made, noting that during her tenure she sought to bolster Canada’s international profile on women’s rights. “It’s about an attitude and being driven to do the right thing.”

The Harper government slashed its operations in significant ways, but it “just made worse shifts that already happened under the Chrétien Liberals,” said Stephanie Paterson, associate professor at Concordia University. She pointed to the dismantling of the independent advisory council that consulted with the agency and decisions to limit funding of “movement groups,” including the National Action Committee on the Status of Women, a lobby group that advocated for the commission’s recommendations, which disbanded in 2007.

An agency that punches above its weight?

Gender-based analysis (GBA) of policy decisions didn’t emerge overnight. Hedy Fry, who served as the file’s minister of state during the Chrétien government, said her work had focused on making GBA mainstream.

With a modest team of bureaucrats, the long-serving MP for Vancouver Centre said they worked with Statistics Canada to dig into the sex-disaggregated data to understand what impact one’s gender has on life circumstances.

Ms. Fry said the agency has traditionally punched above its weight: “We acted like a ministry. We had the ability under Chrétien to do all the things we needed to do.”

Liberal MP Hedy Fry’s work as minister of state on Status of Women was focused on bringing gender-based analysis of policies into the mainstream. The Hill Times file photograph

“We tried to nag, cajole [our colleagues] at cabinet meetings, saying: ‘Where’s your gender-based analysis?’ ” she recalled, adding a number of ministers would dismiss her push to use GBA to inform policy. “‘We don’t need to do that,’ they said. [But] we got it done in some areas.”

Some 22 years or so later, Prime Minister Justin Trudeau’s (Papineau, Que.) government decided to subject its entire 2018 budget to GBA+ analysis—the plus accounts for other characteristics, such as race and sexual orientation, which can affect the barriers women face.

When it comes to applying that lens to every policy decision,  Ms. Monsef said, it’s not exclusive to so-called women’s issues. “Every single cabinet minister is applying that fairness lens … to make sure the outcomes are leading to a more equal Canada.”

Prof. Paterson agreed there is more support for GBA+ from above: “There’s an attempt to put their money where their mouth is.”

At the same time, despite paying lip service to pursuing policies to advance gender equality, the Status of Women portfolio is not a “prestige portfolio,” and it “remains that way,” said Melanee Thomas, professor at the University of Calgary, who has consulted for the agency in the past.

In a cabinet shuffle in 2017, Ms. Monsef was moved from overseeing the Democratic Institutions portfolio to Status of Women, which many had considered a demotion after the brouhaha over the government’s decision to abandon electoral reform.

“The rhetoric has been better. … [But] there don’t seem to be many serious policy initiatives that show they’re actually looking at [how policy affects different groups],” Prof. Thomas said, taking aim in particular at its parental-leave policy, which she argues does not really benefit single women and address the affordability issues around child care.

The politicization of issues at committee?

In the years since the portfolio was established, parliamentarians are doing a deeper dive into specific issues, like sexual harassment in the Armed Forces and the experiences of Indigenous women, which wouldn’t have been looked into with as much depth in the past, said Karen Vecchio (Elgin-Middlesex-London, Ont.), Conservative chair of the House Status of Women Committee.

Conservative MP Karen Vecchio, pictured at a Status of Women Committee in 2017, says she has to act more as a referee in her role as chair. The Hill Times file photograph by Andrew Meade

As Ms. Vecchio sees it, her role at committee is to be neutral, a part she takes seriously amid tensions around who gets to speak on women’s issues. Last year, the Liberals and the NDP blocked Conservative MP Rachael Harder’s (Lethbridge, Alta.) bid to serve as chair, arguing that her vocal opposition to abortion rights flies in the face of true equality.

Ms. Malcolmson stands by that move: “Reproductive justice is at the centre of women’s equality. … It was a very provocative appointment to put Rachael Harder, of all people, there.”

Ms. Vecchio said that she’s had to act more as a referee to ensure that all voices are heard, adding that things have become more politicized over time.

In an emailed statement sent in response to an interview request, Ms. Harder said: “While the committee initially showed signs of multi-party cooperation, tackling important issues like violence against women and girls, that cooperation has all but evaporated at this point. Now the Liberals use the committee to fend off stakeholders that don’t bow to Liberal values or praise Canada’s so-called feminist prime minister.”

On the criticism the government has faced over who gets to call themselves a feminist, Ms. Monsef said the Liberals don’t have a monopoly over that, noting that the “work of members is independent of the executive branch.”

How significant is it that Canada, in contrast to its southern neighbour, has a body dedicated to this file? It depends who you ask.

“The significance of having a Status of Women Minister is related to how important that Minister is within the broader cabinet,” Ms. Harder said in the statement.

There are pros and cons to having a department focused on women’s issues, said Prof. Thomas. On the one hand, if it operates in a silo, it’s easy to dismiss its existence. On the other hand, having it around could help usher in incremental change.

“Our job should work so that this committee doesn’t exist,” Ms. Vecchio said. “We should work until there is equality, and until that time, we have lots of work to do.”

Trudeau ‘deeply regrets’ failing to recuse himself from WE Charity deal, says he was unaware of group’s payments to mother, brother

'I knew that my brother and my mother work as professional public speakers and it is not surprising to me that they got paid by WE,' says Prime Minister Justin Trudeau.

The PMO declined to provide a specific breakdown of self-identified Black staffers among cabinet offices when asked, but says it plans to circulate further voluntary surveys to better understand its staff ‘later this sum
Trending Stories
Would you like to read
this notable, free story?