MPs in the middle of the fire zone say the federal response has been adequate so far, but with the fire season just getting underway, more help will be needed. 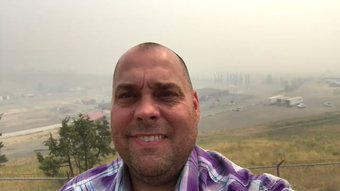 British Columbia is in a state of emergency as the forest fires continue to burn out of control in the province, and the MPs whose ridings have been impacted the most say that while the federal government’s response so far has been adequate, resources are tapped, emotions are running high, and much more assistance will be needed.

“B.C. is burning, and we’re only right at the very beginning,” said Conservative MP Todd Doherty, whose Cariboo-Prince George, B.C., riding has been one of the hardest hit by the forest fires that have set parts of British Columbia’s Interior ablaze for weeks. “It may not be on the front page of newspapers, or the top headlines of the stories, but British Columbia is burning.”

Last week, there were 150 wildfires still actively burning in British Columbia. The fires have displaced thousands of people, with an estimated 6,000 still on evacuation order and more than 300 buildings destroyed. More than 840 fires have burned through 4,260 square kilometres since April 1, at a cost of $172.5-million to fight the flames, despite the province just now starting to enter what is typically the wildfire season. According to the Canadian Red Cross, 50,000 people in the province have registered to receive assistance.

The British Columbia Wildfire Service’s map of active fires as of Thursday, Aug. 3. The fire icons represent fires of note. The red icons are new fires, and the orange icons are active fires.

The wildfires first started to burn out of control in early July in the B.C. Interior, centrally in a few federal ridings, but have since spread to the surrounding areas with no end in sight, and part of the province is under a special air quality advisory.

“There are no party lines in this,” said Mr. Doherty. “I’m not going to say talk is cheap, but we need those words translated into actions, and I have to fully believe that they will do what they say they’re going to do.”

On his way to a town hall in Williams Lake, B.C., where community members have recently returned following a July 15 evacuation, Mr. Doherty, between coughing fits from the smoky air, told The Hill Times in a phone interview from where he was parked by the Marguerite Ferry that he could see plumes of smoke and fire burning through the forest.

NDP MP Wayne Stetski, whose rural Kootenay-Columbia, B.C., riding has just recently seen fires spark up, described seeing some of the forest fire as “like looking at hundreds of campfires burning at the same time all around you.”

This was the first time Mr. Trudeau set foot in the affected areas, after fires had been raging for weeks. A few days prior, he was in Revelstoke, B.C., to attend a Canadian Red Cross Fundraiser for the thousands of people who have been affected by the B.C. forest fires. Mr. Trudeau told CBC last week he waited to tour the area because he didn’t want to take focus away from the resources needed to fight the fires.

So far, the federal government has contributed $27-million in federal funds towards the wildfire relief efforts. The forest fires have affected the Central and South Interior and it’s estimated 45,000 people were evacuated.

Mr. Trudeau has promised to match the province’s funding for wildfire evacuees through a donation to the Canadian Red Cross that will be equal to the total dollar amount being paid to every registered wildfire evacuee household throughout the evacuation. Red Cross is providing $600 for every family displaced, another $600 every two weeks until families can return home, and upon return another $300 per household for groceries or cleaning products, for example.

However, Mr. Trudeau so far has opted not to match the total donations that Red Cross pulls in, as the federal government did following the Fort McMurray wildfire, matching the $104.5-million raised. As of late last week there were over 150 wildfires still actively burning in British Columbia that have displaced thousands of people, with around 6,000 still on evacuation order and more than 300 buildings destroyed. Photograph courtesy B.C. Wildfire Service’s Twitter

Among other assistance, the Canadian Armed Forces have sent approximately 380 troops, as well as aircraft and vehicles; the RCMP has been on the ground acting as the police force for many impacted areas; and Health Canada and the Public Health Agency of Canada have provided beds and blankets.

Other departments doing their part include Environment and Climate Change Canada, which is providing forecasting of weather patterns; Natural Resources Canada is modelling fire activity, growth, smoke, and emissions; and Indigenous and Northern Affairs Canada is making sure the impacted First Nation communities are getting the help they need.

“The Government Operations Centre is working diligently to ensure that support from across the Government of Canada is delivered to our provincial counterparts as quickly and efficiently as possible,” said Mr. Goodale in the statement last week regarding the formation of the ad hoc committee. “From deployments of Canadian Armed Forces to providing cots and blankets from National Emergency Stockpile, we are committed to providing a coordinated federal response to the people of British Columbia. We continue to monitor and assess the wildfire situation, and our federal response will evolve as the situation unfolds,” he said.

“I wanted to come out and just say a very simple, but sincere thank you to all the first responders and all those in the community who have really just dropped everything to help all of those that have been affected by this terrible disaster,” said Mr. Scheer in a Facebook video he posted about his tour of the area.

“I think they heard some fairly emotional stories when they were here on the ground too,” Mr. Doherty said about his visiting federal counterparts.

On July 14, Mr. Trudeau announced the creation of the ad hoc cabinet committee to coordinate efforts to help those affected by wildfires in British Columbia. It includes eight members of the federal cabinet.

According to the Privy Council Office the ministers were selected “based on a variety of factors including relevant portfolio responsibilities and regional representation.”

The cabinet committee’s job is to oversee the government approach to those impacted by the fires. During the immediate emergency response, it manages the requests for assistance and funding from the province and mobilizes the resources needed. Once the state of emergency ends, the committee will focus on the rebuilding phase.

The committee has met once so far, on July 20 to discuss what additional measures the federal government can take to respond to the wildfire and will meet on an ongoing basis throughout the recovery efforts. Its members are also receiving regular updates from Public Safety about the current situation and the federal resources at play.

Following the first meeting it was decided Ms. Qualtrough, Mr. Goodale, and Mr. Sajjan would visit Prince George and Kamloops to witness the current response efforts and meet with their provincial counterparts.

“I will continue to work with my colleagues towards addressing both the short and long-term needs of those affected. It was important for us to see first-hand the impact these wildfires are having on families and I would like to thank all the first responders and volunteers on the ground for helping to keep British Columbians safe,” said Ms. Qualtrough in a statement following the tour of the affected areas.

Mr. Doherty said so far, Mr. Goodale’s office has been “very” responsive to any calls and emails regarding the fire response.

Conservative MP Cathy McLeod (Kamloops-Thompson-Cariboo, B.C.) met with the three ministers when they were in Kamloops. Parts of her constituency, including 100 Mile House, have been significantly damaged by the wildfires, and with the current fire in Elephant Hill rolling out of control, “whole towns are potentially at risk,” she told The Hill Times in a phone interview.

Ms. McLeod said that while it was good for Mr. Trudeau to tour the area to let people know that he cared, the cabinet committee, especially the B.C. members are more important players because they’re the ones who have to keep up on the current situation and are responsible for making the decisions around the adequate government response.

‘This is going to take a long time for us to recover from’: MPs in the devastated areas say financial, emotional, impacts of fires will be felt for the foreseeable future

Between coughs caused by the smoky conditions, Ms. McLeod said thousands of her constituents have either been evacuated, or are on evacuation alerts where they’d have to pack up and leave on a moment’s notice.

“You feel that sense of emotional fragility with so many conversations that you have with so many people,” she said.

Ms. McLeod said her role as the MP has been fluid and that she has adjusted to the changing needs of her constituents as the situation evolves. After meeting with members of the cabinet committee when they came to town, Ms. McLeod said she will be keeping them informed on how the response can be sped up to respond to local needs, like the ranching industry for example, which she described as “devastated” by the fires.

Mr. Doherty said already resources are being maxed out, emotions are running high, and uncertainty is looming large with fires still burning out of control, fluctuating evacuations, and the real forest fire season just getting underway.

Mr. Stetski, a former mayor of Cranbrook who previously oversaw the Environmental Stewardship Division for the East and West Kootenays of the B.C. Ministry of Environment, spent some time with Mr. Trudeau when he was in Revelstoke.

He said climate change is “absolutely” a factor. “We’re living with it every day, and the results of it every day,” he said, adding that he’d like to see more money go into preventing these fire situations, through managing the fuels within the forests, and the forest types.