Liberal MP Larry Bagnell, chair of the House Affairs Committee, adjourned the filibuster meeting without unanimous consent, forcing Conservative MP Scott Reid to chase him and other Liberal committee members out of the room, while yelling 'that is bullshit, Mr. chair!' 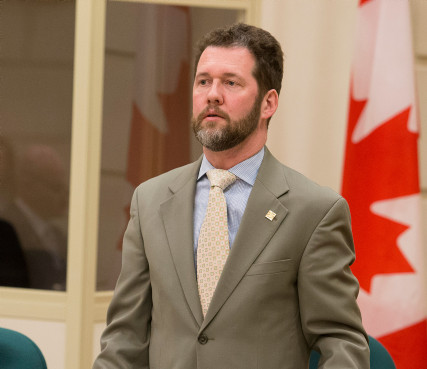 Conservative MP Scott Reid, a member of the Procedure and House Affairs Committee, tried to raise a point of order to prevent the May 2 meeting from being unilaterally adjourned by Liberal chair Larry Bagnell, but was unsuccessful. The Hill Times photograph by Jake Wright

PARLIAMENT HILL—The Liberals shut down the more than 80-hour filibuster at the Procedure and House Affairs Committee on Tuesday morning which was launched a few weeks ago in reaction to the government’s attempts to speed up a study on proposed changes to the House rules and opposition MPs reacted angrily to the move.

Liberal MP Larry Bagnell (Yukon), chair of the House Affairs Committee, opened the meeting by saying that, given that the privilege motion regarding MPs’ access to the Hill on budget day was currently being debated in the House and was expected to be sent to the committee on Tuesday, he said it would take full precedence over any other matters before the committee—thanks to a Conservative amendment—and that the filibuster should not continue. With that, Mr. Bagnell then banged the gavel and adjourned the meeting.

But Conservative MP Scott Reid (Lanark-Frontenac-Kingston, Ont.), a committee member, interrupted Mr. Bagnell to raise a point of order, however, Mr. Bagnell did not acknowledge him and started to walk out of the committee room.

At that point, Mr. Reid yelled, “that’s bullshit, Mr. chair… what the fuck is this, Larry?…What kind of shit are you pulling here?” and “I said ‘point of order’ before you pulled that shit.” Mr. Reid then followed Mr. Bagnell out the door.

The move to adjourn the meeting did not technically end the filibuster because the motion that prompted it had to be withdrawn. But it has been essentially buried because the vote on the precedence motion regarding MPs’ access to the Hill and the amendment to fast track its study at the House Affairs Committee was scheduled for today in the House and is expected to pass.

Mr. Bagnell told The Hill Times that this was his reason for ending the meeting in the way he did, saying the House had asked the committee to move forward on this matter. “There wasn’t much use” in continuing the filibuster considering the incoming privilege matter, he said, after the brief meeting.

“We have to deal with that as precedence … which adjourns our debate right now,” added Liberal MP Scott Simms (Coast of Bays-Central -Notre Dame, Nfld.) a committee member and the architect of the contentious motion to see the committee study the Liberal government’s proposed changes to the Standing Orders and report back by June 2, without the requirement of all-party agreement.

Though the motion was not formally withdrawn at the committee this morning, Mr. Simms tweeted that, given Government House Leader Bardish Chagger’s (Waterloo, Ont.) letter and the all-party support for the privilege motion, he intends to withdraw his motion.

However, NDP MP David Christopherson (Hamilton Centre, Ont.)—a committee member who hadn’t even made it into the room in time to watch the meeting erupt—told The Hill Times: “The government is just continuing to make it uglier and uglier … the chair unilaterally adjourned. Unfortunately, in this case, it suggests he’s being very partisan.”

Mr. Christopherson added, “We’re still in crisis at PROC, it’s just a different variation of it.” He went on to say that, “if the government was sincere about wanting to reset, then they should just withdraw the Scott Simms motion. And in the absence of that, we have to believe that this vampire is not yet dead.”

In a follow-up interview with The Hill Times, Mr. Reid called the two months of filibuster that he initiated a “farce,” and questioned Mr. Bagnell’s judgment as chair of the committee.

“The chair just deliberately ignored me… he just got up and left along with the other Liberal members,” Mr. Reid said, adding that he thought the chair was acting as a “partisan tool,” and should apologize for his behaviour.

“I’ve never been so angry in the House of Commons, I’ve never seen the rules abused this way. The abuse occurred on the part of the Liberals, it’s the Liberals that need to apologize for breaking the rules to shut down debate, to deprive this place of its democracy,” he said.

Following the excitement on Tuesday morning, Mr. Reid filed a notice of motion with the committee which requested that Ms. Chagger appear before the committee before May 12, for two televised hours, “to discuss her proposals for changing the Standing Orders.”

The March 10 discussion paper released by Ms. Chagger on potential Standing Order reforms, and the subsequent motion from Mr. Simms on the same subject, led to more than 80 hours of filibustering at the Procedure and House Affairs Committee. The filibuster began on March 21. The opposition parties saw the move as an attempt to unilaterally push through important changes to how the House is run.

“As government House leader, I had truly hoped we could start a discussion about modernization at the Procedure and House Affairs Committee,” Ms. Chagger told MPs in the House of Commons on the morning of May 1. “This has not happened, and I regret that.”

Instead, the government will introduce a motion in the House by the end of the spring session that will propose changes to the Standing Orders, Ms. Chagger revealed in a letter sent to opposition House leaders on April 30.