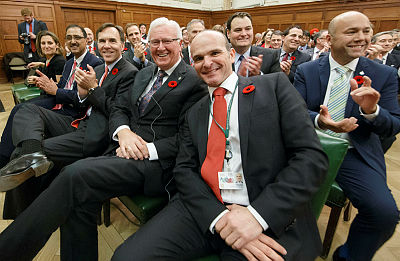 PARLIAMENT HILL—Some Liberal MPs are talking about bringing per-vote subsidies back for federal political parties, but deny this has come up because of the negative headlines or opposition criticism regarding the party’s fundraising events.

“The general consensus is that it would be one way of avoiding the misconception that you have to sell your soul for fundraising,” said Liberal MP Alexandra Mendès (Brossard-Saint-Lambert, Que.), in an interview with The Hill Times. “[The per-vote subsidy] is perhaps the fairest and the most legitimate way of supporting political parties.”

A former president of the Liberal Party of Canada in Quebec, Ms. Mendès was first elected in the 2008 federal election, lost her seat in 2011, but was elected again in last year’s general election. She said that Liberal MPs have been discussing the subject of bringing back per-vote subsidies informally with each other and predicted that soon this conversation will take place in the national Liberal caucus. Her main argument for reinstating subsidies is to eliminate the perception that money can influence party policies.

When asked about critics who say these discussions around vote subsidies are about trying to deflect controversy over the so-called “cash for access” events Liberals have been in the news for, Ms. Mendès said: “They can conjecturize all they want, but for me that’s not the reason. If they see it that way, it’s their right.”

Rookie Liberal MP Robert Falcon-Ouellette (Winnipeg Centre, Man.) in an interview said he supports the idea of bringing back per-vote subsidies. He said Canadians should have total confidence that their representatives will not favour an individual or any specific group on public policy issues because they’ve donated money to a party. For that, he said per-vote subsidies could be an effective tool.

“We need to have a way of ensuring that people, when they look upon a politician, that they feel comfortable and they know that the politician is working for them, not for someone else,” said Mr. Ouellette. “I don’t know if we can get rid of political donations altogether, but at the end of the day, some form of public subsidy should occur and it’s a good idea.” 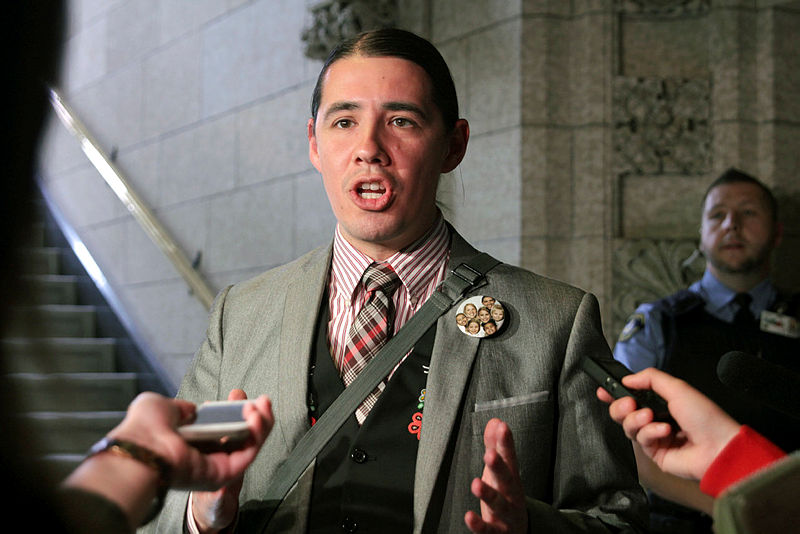 Rookie Liberal MP Robert-Falcon Ouellette wants the per-vote subsidies reinstated. He said Canadians should have confidence that federal lawmakers will not favour an individual or a group because they donated money to a political party. The Hill Times photograph by Sam Garcia

Former Liberal prime minister Jean Chrétien first introduced per vote subsidies in 2003. This measure was undertaken as part of his sweeping political financing reforms, which among other initiatives banned corporations and unions from making any political donations to federal political parties. The individual donation limit was also restricted at $5,000. To make up for the lost income as a result of these changes, the Chrétien government announced that any party that receives two per cent of the vote nationally, or five per cent in the ridings where the party ran candidates, would receive a subsidy on a quarterly basis based on the number of votes each party won in the preceding election.

The federal parties started to receive these subsidies on a quarterly basis in 2004. At the time, for every vote a political party won in an election, it received $1.75, but was to be adjusted for inflation each subsequent year. After winning a majority government in the 2011 federal election, former prime minister Stephen Harper introduced legislation to phase out the per-vote subsidies, arguing that taxpayers should not have to financially support political parties’ they don’t vote for. At that time, political parties were receiving $2 per vote. The federal parties received their last quarterly allowance in April 2015.

In recent weeks, the Liberal Party has been criticized by the opposition parties about their fundraising work. The most recently reported event was a fundraiser in Toronto that happened on April 28. The Globe and Mail wrote that two members of the Cannabis Friendly Business Association (CFBA) went to a $150-per-ticket event where Liberal MP Bill Blair (Scarborough Southwest, Ont.), the prime minister’s point man on recreational pot legalization file, was the chief guest. Mr. Blair is the parliamentary secretary to Justice Minister Jody Wilson-Raybould (Vancouver Granville, B.C.). The fundraiser took place at a Toronto law firm that advises clients in the cannabis business. A Liberal Party spokesman, in an interview with the Globe, denied any ethical wrongdoing but said the party would refund donations from representatives of the Cannabis Friendly Business Association.

Before this news report, The Globe and Mail also reported a $1,500-per-person fundraiser where Prime Minister Justin Trudeau (Papineau, Que.) was the featured guest. The fundraiser took place in May and was attended by wealthy Chinese and Chinese-Canadian businessmen. One guest at the event, Shenglin Xian, was awaiting for a decision from federal bank regulators to start a new bank, which he received a few months later. Another guest at the event, Zhang Bin, a Chinese-Canadian billionaire, did not donate any money to the Liberal Party but gave a gift of $750,000 to the Université de Montreal law faculty and $200,000 to the Pierre Elliott Trudeau Foundation. He also donated $50,000 to pay for the statute of Pierre Elliott Trudeau, the former prime minister and late father of the current one.

The Globe and Mail has also reported a number of other fundraisers that were attended by senior cabinet ministers.

In criticizing the Liberal Party’s fundraising events, critics point to Mr. Trudeau’s own guidelines that he issued after becoming prime minister. One of the principles mentioned in the “Open and Accountable Government” document released by the prime minister in November 2015 states: “Ministers and Parliamentary Secretaries must ensure that political fundraising activities or considerations do not affect, or appear to affect, the exercise of their official duties or the access of individuals or organizations to government.” In outlining the next principle in the same document, Mr. Trudeau said: “There should be no preferential access to government, or appearance of preferential access, accorded to individuals or organizations because they have made financial contributions to politicians and political parties.”

Meanwhile, Ms. Mendès insisted that the federal Liberal Party did not break any rules in any of the fundraisers and are following the law. She dismissed criticism that attendees at these Liberal fundraisers are gaining preferential access.

Liberal MP Bill Casey (Cumberland-Colchester, N.S.) told The Hill Times that he is in support of reinstating the per-vote subsidy. He said if the government brought this measure back, it would help MPs focus more on the parliamentary and policy work and would reduce the pressure of raising funds for the next election. Also, it would eliminate the perception that money influences politics.

“I prefer it for a whole lot of reasons. For one thing, raising money takes time and you don’t want to put yourself in a position where there’s a perceived obligation or anything,” said Mr. Casey. “So, it’s just better.”

Mr. Casey said that only opposition parties and the media are talking about the cash-for-access controversy and he has not heard about it from any of his constituents. He said this controversy has nothing to do with his position on per-vote subsidies.

“I haven’t heard one word about contributions. I just was home all weekend and I didn’t hear a word about it,” he said last week.

Rookie Liberal MP Marc Miller (Ville-Marie-Le Sud-Ouest-Île-des-Soeurs, Que.) told The Hill Times that bringing back per-vote subsidies is currently not on the government agenda, but he’s in favour of this idea. “There’s some attractiveness to it. It’s worth examining,” said Mr. Miller.

Conservative MP Tom Lukiwski (Moose Jaw-Lake Centre-Lanigan, Sask.) said he has mixed feelings about it. He said if the government chooses to pursue this idea, his support would depend on the details in the proposal. “The devil is always in the details,” said Mr. Lukiwski.

Conservative MP Larry Miller (Bruce-Grey–Owen Sound, Ont.) also said he would be able to offer an opinion after taking a look at what the government is proposing. However, he said the current laws in place that bar businesses from making any donations to parties should be repealed and they should be allowed to donate the same amount that an individual can.

NDP MP Irene Mathyssen (London-Fanshawe, Ont.) said she’s in favour of reinstating subsidies to eliminate the perception that money can affect national public policies. Also, she said it would provide resources to all parties to run a competitive campaign.

MPs of all parties said that one of the toughest parts of their job is raising funds to ensure they have adequate resources for election campaigns.

“It is always a struggle,” said Mr. Lukiwski. “There’s only a finite number of donors who’ll give money to any political party, and even a less amount of people will give to the Conservatives or the Liberals or the Bloc. It’s a challenge. It’s always been difficult.”