While the substance of the bill was untouched, the House Justice Committee passed a coordinating amendment regarding the trans rights bill C-16 that could delay S-201’s passage. 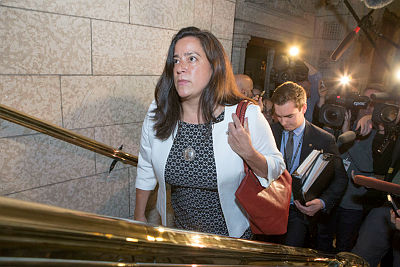 Justice Minister Jody Wilson-Raybould, pictured on the Hill. The House Justice Committee passed a coordinating amendment by Liberal MP Colin Fraser that, while not altering the substance of the controversial Bill S-201 on genetic discrimination, will force the bill to go back to the Senate before passing. The Justice minister wanted to see substantive changes to the bill, but that did not happen. The Hill Times photograph by Jake Wright

PARLIAMENT HILL—The bill that pit Liberal backbenchers against cabinet is headed back to the Senate, but not for the reason Justice Minister Jody Wilson-Raybould had hoped.

During Thursday’s clause-by-clause by the Justice and Human Rights Committee, the Senate public bill, S-201, Genetic Non-Discrimination Act passed as it was proposed, untouched, but on the suggestion of Liberal MP Colin Fraser (West Nova, N.S.), a coordinating amendment that will send the controversial, long-fought bill back to the Senate was also passed.

During the brief clause-by-clause on the bill, which was sponsored by Senate Liberal James Cowan, the 10 clauses of the bill as it was proposed passed the committee almost unanimously, but as the bill neared the end of receiving all the approvals needed to pass committee, Mr. Fraser, proposed adding a clause 11.

This clause, as proposed and passed, was aimed at protecting the intent of both Bill S-201 and Bill C-16, the government’s trans rights bill, because they propose to amend the same section of the Canadian Human Rights Act. The technical change added on to the bill makes it so that whichever bill passes second doesn’t override the wording of the first.

This amendment would keep it so both genetic discrimination and gender identity would be listed as prohibited grounds for discrimination, and not one or the other. It’s possible this amendment could have been made to Bill C-16 instead during its Senate study, as it’s currently before the Senate at second reading, but would have similarly sent that government bill back to the House as a result.

When questioned by reporters on whether this could be a Trojan horse for Ms. Wilson-Raybould (Vancouver-Granville, B.C.) to have another opportunity air her concerns over the legislation when it is reconsidered by the Senate, Mr. Fraser denied that being a consideration when he and his Liberal caucus members put forward the amendment.

“What would be the alternative? That we wouldn’t pass a bill that would actually have the effect that we intend it to have? This is our parliamentary process,” said Mr. Fraser. He defended the choice to amend Bill S-201 instead of putting forward the same amendment when their committee looked at Bill C-16 earlier this session, saying: “it didn’t come up.”

Committee member and Liberal MP Chris Bittle (St. Catharines, Ont.) said the department flagged the change to the committee members “to avoid any issues with either of those bills.”

The bill, seeking to introduce the first-ever nationwide penalties against genetic discrimination pits some Liberal MPs against the government, as Ms. Wilson-Raybould and her department argued hard for changes because they say the bill is unconstitutional on the grounds of provincial jurisdiction over the insurance industry.

Bill S-201 seeks to ban unsanctioned access to view or disclose personal genetic test results or require a person take a genetic test, including employers and insurance companies. Doing so would result into large financial penalties or jail time. Exceptions would be made for medical, scientific, or pharmaceutical purposes. The bill would also amend the Canada Labour Code and the Canadian Human Rights Act to protect against the disclosure of genetic tests, and it would prohibit discrimination on the grounds of genetics.

Not one comment was made addressing Ms. Wilson-Raybould’s constitutionality concerns, nor were any amendments to this affect suggested by anyone during the 30-minute committee meeting on Dec. 1. Liberal members said they did not hear any convincing arguments on the government’s position, and was validated in their position by a number of constitutional expert witnesses, including Peter Hogg, a leading authority on constitutional law.

“Based on the evidence we heard we passed a bill that is a good bill and I don’t believe that the risk of a problem constitutionally is very high,” said Mr. Fraser.

Mr. Bittle backed up his colleague saying that the arguments for the constitutionality of the bill were “clearer and better arguments.”

Bill S-201 originally passed the Senate on April 14, with some technical amendments made by the Senate Human Rights Committee, which Sen. Cowan did not object to. Sen. Cowan has tried to get similar bills passed twice before, once in 2013, and again in 2015. Both times, the bills died on the Order Paper.

Critics, primarily in the insurance industry, argue that withholding genetic information would increase the cost of life insurance premium rates and would hike the cost of critical illness insurance, and justice parliamentary secretary Sean Casey (Charlottetown, P.E.I.) has spoken to the likelihood of a court challenge from the industry on the bill. Those in favour of the bill argue that it’s necessary to protect Canadians from being disadvantaged as a result of a genetic predisposition.

The bill will now move to third reading in the House, where Commons sponsor of the bill Rob Oliphant (Don Valley West, Ont.) will be lobbying to get the continued support of the rest of his caucus, who voted unanimously with the opposition to get the bill into committee. Once it passes the House, it’ll be referred back to the Senate for consideration of the amendment, instead of heading for Royal Assent.

Conservative committee member and MP Ted Falk (Provencher, Man.) said he expects the bill to still find its way quickly through the Senate because it’s not a substantive amendment.

When asked to comment on whether this outcome was the hope of the minister, justice parliamentary secretary Bill Blair (Scarborough Southwest, Ont.), who was in attendance at the brief meeting wouldn’t comment, saying just: “this is how the process is supposed to unfold.”