After Aleppo: a kind of peace?

If Assad wins his six-year battle, will the outside powers that have intervened in the war accept Bashar al-Assad’s victory, or do they keep the war going? 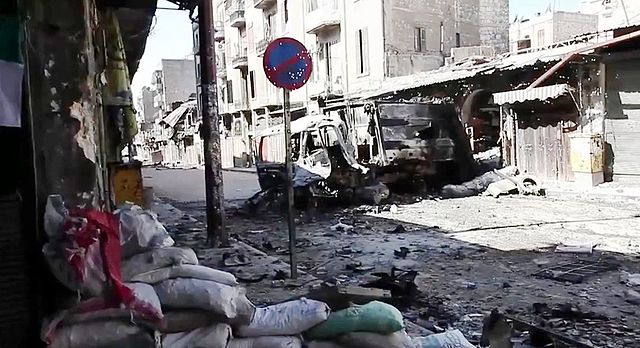 A bombed-out street in Aleppo, Syria, which has been under siege for the past six years. Photograph courtesy of Voice of America News by Scott Bobb

Eastern Aleppo, the rebel-held half of what was once Syria’s biggest city, is falling. Once the resistance there collapses, things may move very fast in Syria, and the biggest question will be: do the outside powers that have intervened in the war accept Bashar al-Assad’s victory, or do they keep the war going?

Even one year ago, it seemed completely unrealistic to talk about an Assad victory. The Syrian government’s army was decimated, demoralized and on the verge of collapse; every time the rebels attacked, it retreated.

There was even a serious possibility that Islamic State and the Nusra Front, the extreme Islamist groups that dominated the rebel forces, would sweep to victory in all of Syria. But then, just 14 months ago, the Russian air force was sent in to save Assad’s army from defeat.

It did more than that. It enabled the Syrian army, with help on the ground from Shia militias recruited from Lebanon, Afghanistan, and Iraq—and mostly trained and commanded by Iranian officers—to go onto the offensive. Assad’s forces took back the historic city of Palmyra. They eliminated the last rebel-held foothold in the city of Homs. And last summer, they began to cut eastern Aleppo’s remaining links with the outside world.

In July, government forces took control of the Castello Road, ending the flow of food and supplies for eastern Aleppo’s ten thousand rebel fighters and its claimed civilian population of 250,000 people. (The real total of civilians left in the east of the city, once home to around a million people, is almost certainly a small fraction of that number.)

A rebel counter-offensive in August briefly opened a new corridor into eastern Aleppo, but government troops retook the lost territory and resumed the siege in September.

For almost two months now almost nothing has moved into or out of that besieged half of the city, and both food and ammunition are running short inside. So the resistance is starting to collapse.

The Hanano district fell on Saturday, and Jabal Badro fell on Sunday. The capture of Sakhour on Monday has cut the rebel-held part of Aleppo in two, and the remaining bits north of the cut will quickly be pinched out by the Syrian government’s troops.

The southeastern part of the city may stay in rebel hands a while longer, but military collapses of this sort are infectious. It is now likely that Bashar al-Assad will control all of Aleppo before the end of the year, and possibly much sooner.

At that point he would control all of Syria’s major cities, at least three-quarters of the population that has not fled abroad, and all of the country’s surviving industry. He would be in a position to offer an amnesty to all the rebels except the extreme Islamists of Islamic State and the Nusra Front, and a lot of the less fanatical Syrian rebels would be tempted to accept it.

For the many foreign powers that are involved in the Syrian civil war, it would then come down to a straight choice: Assad’s cruel but conventional regime or the Islamist crazies.

Even Turkey and Saudi Arabia, however much their leaders may loathe Assad, could not openly put their armies at the service of the Islamists. (They used to send them arms and money, but even that has stopped now.) And for a newly installed President Donald Trump, it would become a lot simpler to “make a deal” with Russia’s President Vladimir Putin to finish the job of crushing Islamic State and the Nusra Front together.

Would the Russians and the Americans then hand over all of the recaptured territory to Assad’s regime? Many people in Washington would rather hang onto it temporarily in order to blackmail Syria’s ruling Baath Party into replacing Assad with somebody a bit less tainted, but a deal between Putin and Trump would certainly preclude that sort of games-playing.

How could Trump reconcile such a deal with Russia with his declared intention to cancel the agreement the United States signed last March to curb Iran’s nuclear weapons ambitions? Iran is Russia’s closest ally in the Middle East, and if Trump broke that agreement he would be reopening a US military confrontation with Iran.

Since this question may not even have crossed Mr. Trump’s mind yet, it would be pointless for us to speculate on which way he might jump three months from now.

It’s equally pointless to wonder what kind of deal the Syrian Kurds will end up with. Turkey will want to ensure that they have no autonomous government of their own and are thoroughly subjugated by Assad’s regime. The United States, on the other hand, owes them a debt of honour for carrying the main burden of fighting Islamic State on the ground—but the Kurds are used to being betrayed.

All we can say with some confidence at the moment is that it looks like Assad has won his six-year war to stay in power.