Can the Liberals really deliver on their promise for a strong middle class? If the real test of a strengthened middle class is an increase in the median inflation-adjusted hourly earnings of Canadian workers, then there are reasons to have doubts. 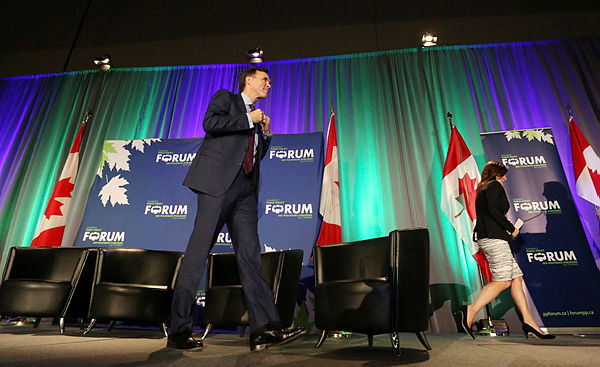 TORONTO—The Liberals won the federal election just over a year ago, running on a platform entitled “A New Platform for a Strong Middle Class.” This is the core pledge made to Canadians by Prime Minister Justin Trudeau and the Liberal government.

But can the Liberals really deliver? If the real test of a strengthened middle class is an increase in the median inflation-adjusted hourly earnings of Canadian workers, then there are reasons to have doubts.

The three economists—James Uguccioni, Andrew Sharpe and Alexander Murray—find that between 1976 and 2014, while productivity increased by 1.12 per cent a year, median (middle class) real hourly earnings rose just 0.09 per cent a year. In fact, median or middle class annual earnings, after adjusting for inflation, were $30,167 in 2014, compared to $31,700 in 1976. Both the stagnation in the median hourly wage and the fall in hours worked explain the dismal result for the middle class.

“This disconnect between rising labour productivity and stagnant earnings for the median worker likely explain the prevailing sense of middle-class malaise,” they say. They blame globalization, technological change and institutional change as key factors in the “hollowing out of the middle” in the earnings distribution, all factors that helped elected Donald Trump in the U.S.

As the paper notes, labour productivity is still generating earnings growth for workers overall. “But that earnings growth is benefitting workers at the top and at the bottom of the earnings distribution while the median worker—the representative of the ‘middle class’—has benefitted hardly at all.” Several factors explain why the middle class has fared so badly.

The first, the paper says, is globalization, which includes free trade agreements. “The world’s increased openness to international flows of goods and capital has created opportunities for capital in advanced countries to seek high returns around the world and, at the same time, has brought workers in these economies into competition with the workers of relatively low-wage countries,” it says. If a company can make something for less by offshoring in another country it usually will. Hence, the impact of trade with low-wage countries on jobs and wages “may be larger and more persistent than economists once thought,” the authors of the report concede.

A second factor, the paper continues, is technological change. While technology typically raises the wages of high-skilled workers and lowers the wages of lower-skilled workers, it now appears that computer technology is “increasingly able to automate the kinds of routine tasks once performed by middle-wage workers in clerical or middle-management occupations” as well as continuing to eliminate jobs in manufacturing. In other words, “the middle of the wage distribution is ‘hollowed out.’” Business is heavily focused on replacing humans with technology wherever it can.

But there are other factors as well, as the paper points out. One is that middle-class earnings have not kept up with rising prices. Rising household debt is one response. At the same time, labour’s share of national output is declining while that of capital has been growing; labour’s share of total income fell from 59.9 per cent in 1976 to 53.3 per cent in 2014. If labour’s share had remained unchanged, there would have been an additional $130.8-billion that would have gone to labour rather than capital in 2014.

Not only has the economy become more capital intensive, but much of that capital is being used to eliminate jobs. “Technological developments of recent decades are entirely different from the technological developments which relied on workers in the past,” the paper argues. “Specifically, investment in information and communications technologies in the last two decades has boosted productivity across the board, but has also led to the automation of repetitive jobs.” Labour is becoming a less important part of the production process. The continued weakening of union membership has likewise reduced the bargaining power of the middle class.

As the forces of globalization and technological change continue to play out, the paper warns, highly skilled workers, such as those who can design new computer software, will enjoy high earnings growth while their increased demand for services may lead to some higher-wage growth in low-wage occupations. “But in the middle, earnings do not grow.”

The report concludes with a serious warning: “The forces that are likely causing the stagnation of middle-class earnings are unlikely to disappear in the near future. If anything, the possibilities for further substitution of capital are likely to expand with the advent of self-driving vehicles, self-service technology in retail, automated fast food preparation, and so on.” What this means is that “at some point, policymakers will have to grapple with the implications of these changes for living standards of the middle class.”

Why wait? Finance Minister Bill Morneau has failed to provide a serious analytical framework for addressing the middle-class challenge. We need a new version of the Economic Council of Canada (the former Economic Council was abolished by prime minister Brian Mulroney after it published reports he didn’t like) as an arm’s-length and independent body of experts to research and publish future-looking studies to help policymakers and the public better understand and analyze the challenges we face. If we really want to boost the middle class we need better knowledge and ideas than we have today.

David Crane can be reached at crane@interlog.com.