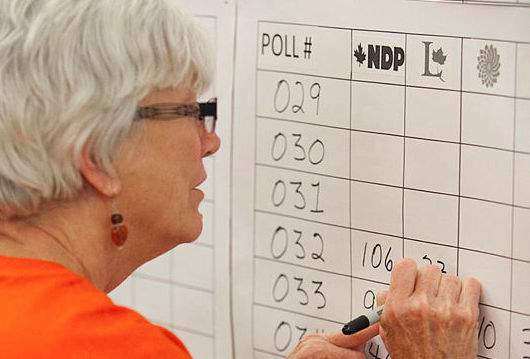 Chief Electoral Officer Marc Mayrand says one of his recommendations to Parliament following the last election may mean that political parties and candidates have to “trade off” some of the “granular results they are used to getting” from Elections Canada in favour of increased flexibility for voters.

The recommendation, which appears in his report titled An Electoral Framework for the 21st Century: Recommendations from the Chief Electoral Officer of Canada Following the 42nd General Election, suggests that an amendment be made to the Canada Elections Act that would permit voters to “vote at a place other than the table assigned to their polling division, currently known as their polling station.”

Mr. Mayrand recommends that “the notion of polling station be expanded to encompass the entire space where voting takes place, which may or may not include several polling divisions.” The purpose of this recommendation is to make voting a more flexible process for electors, the report says. There were cases of long line-ups during the election last fall.

Under the proposed change, if a voter was waiting in a long line at their designated polling station and another line next to them had fewer people, they could switch to the shorter line without a headache. Or they could even vote at another polling location altogether (a church closer to their work, instead of the school near their home, for instance). The voting rules, as they stand now, don’t allow this.

But in an interview last week at his office, Mr. Mayrand told The Hill Times that “the minute you start allowing people to vote at any poll,” the data that parties and candidates receive during and after election day becomes much less precise. He described it as a “kind of trade-off.”

By broadening the geographic region—even just by allowing a voter to switch tables at the same location—that voters are able to vote at, it means the data received by parties and candidates is less precise, and less organized. They would still receive updated versions of the voter registration list, but it might not be organized by poll.

Cory Hann, director of communications for the Conservative Party, wrote in an email that the poll-by-poll information that parties and candidates currently receive from Elections Canada allows for a better understanding of shifting demographics, turnout, and trends, within a specific and precise area of a riding.

He continued: “while we all agree with the end-goal of shorter lines at polling locations, this particular change could result in a step back in information available to voters, political parties, academics, and the media alike. We believe in Elections Canada providing more data to the Canadian public, not less.”

Dan Palmer, speaking for the Green Party, wrote in an email that “the Green Party of Canada supports any measure that will make voting easier and increase voter turnout. The goal is engagement in democracy, not aiding political parties in data work.”

“Like any political party, we canvass and incorporate a get-out-the-vote strategy during advance voting and on election day using increasingly sophisticated data, which includes historical data from Elections Canada. We are confident in our data-analysis capabilities pending any changes to the way Elections Canada disseminates historical polling information,” he said.

The Liberal Party responded to a request for comment on the recommendation saying: “Canadians expect democracy to be accessible and broadly engaging,” pointing to Prime Minister Justin Trudeau’s (Papineau, Que.) election promise “to making it easier for Canadians to vote.” The emailed statement said the government “will soon bring forward legislation to address this,” and that the party would “await the specifics of [the] legislation before commenting on any of its proposals.”

Nathan Cullen (Skeena-Bulkley Valley, B.C.), his party’s democratic reform critic, said in an emailed response on behalf of the NDP, that it was a “no-brainer.”

“When voters get turned away from an incorrect poll, it makes it more likely that they will simply not vote. This is a fairly simple measure that will increase the ease of voting,” he said.

Career campaign manager John Laschinger said he can see how the lack of information could make campaigning that much more difficult.

Chief Electoral Officer Marc Mayrand says parties and MPs must consider that some of his recommendations could change the way they campaign. The Hill Times photograph by Sam Garcia

“It makes it a bit more cumbersome,” he said, saying he imagined the main problem would be parties getting the vote out on election day. Typically candidates will send scrutineers to the polling station to keep track of which voters from each poll have already voted. If voters who have been identified as supporters haven’t arrived to vote yet, the scrutineer communicates that to the campaign, which then phones the voters to encourage them show up.

He said it wouldn’t be impossible, but it would be “a lot more difficult to get out your own identified vote” if you didn’t have a specific place where you were expecting certain identified supporters to show up at.

“I don’t think you’d want to give people the ability to go and vote anywhere. That would make it extremely difficult for the parties for people who are organized, they’ve identified their vote, and they want to make sure they get their vote out. In a close election, that can make the difference between winning and losing,” Mr. Laschinger said. “I think you at least want it to be in the polling station.”

He was also skeptical about the recommendation for increased flexibility as a whole. “I think they’re nibbling at the edges. If participation’s a problem, then let’s go online,” he added.

Mr. Mayrand’s recommendations are currently being studied during a series of private meetings of the Procedure and House Affairs Committee. Mr. Mayrand has appeared before the committee to discuss his recommendations with the committee. He said of his first appearance, “there was good reception to the idea of letting electors vote at any place, at least within the polling place, or even within the riding.”

Conservative MP Jamie Schmale (Haliburton-Kawartha Lakes-Brock, Ont.), who sits on House Affairs Committee, said if his memory served him correctly, the committee wasn’t prepared to go to the length of allowing voters to vote at entirely different polling stations in the riding, “because of issues regarding basic security, that type of thing. I don’t think there was an appetite to go that step further.”

However, he said the committee was considering the proposed change to allow voters to vote at different tables within their designated polling station. He said it was his understanding that the same data would still be collected by Elections Canada, and that “it would just be a matter of who can check your name off the list.” He said speed and efficiency were the driving factors behind the proposed change.

“But we’re still going through it, so there’s still more to come,” he said in an interview in the lobby of the House of Commons Monday.

The committee’s report on the chief electoral officer’s recommendations won’t be released until at least the new year, say committee members.