Can the same divisive rhetoric Trump employed resonate with more than a sliver of Canadian voters? Far-fetched, at best. 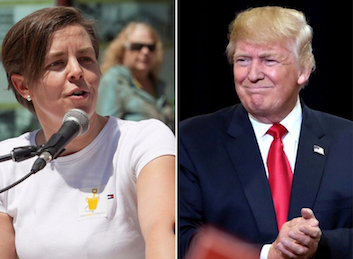 Kellie Leitch, left, aligning her political aspirations with Donald Trump’s surprise presidential victory in the hopes of replicating his success in Canada will end only in defeat and disappointment, argues Evan Sotiropoulos. The Hill Times photograph by Jake Wright & photograph courtesy Gage Skidmore

TORONTO—A 2010 Stanford business school study argued that negative product reviews actually increase sales for a company when it is relatively unknown. This is because, the argument goes, any publicity increases product awareness (although negative reviews for well-known products have the opposite effect). “This suggests that whereas the negative impression fades over time, increased awareness may remain,” explained one of the study’s authors.

This seems to be the approach—hope—of the relatively unknown Kellie Leitch and her campaign to become Conservative Party leader. There must be a blind, uncritical acceptance of the idea that all publicity is good publicity. Otherwise, what explains the ongoing negativity surrounding the former minister of labour and status of women, who recently defended herself by declaring, “I am not a racist.”

While her campaign’s strategy to control the narrative and increase her popularity is working for now, it has also cost her a number of high-profile supporters in what’s been a rather uninspiring leadership race to date.

Even so, aligning her political aspirations with Donald Trump’s surprise presidential victory (which she described as an “exciting message that needs to be delivered in Canada as well”) in the hopes of replicating his success in Canada, will end only in defeat and disappointment.

The idea that Leitch, or anybody else (for instance, Kevin O’Leary) could reproduce in today’s Canada the success Trump achieved in America, is misguided for many reasons.

The Donald, er, president-elect, has been in the spotlight for decades. His famous book, The Art of the Deal, was published almost 30 years ago, and his last name is synonymous with money, success, and power. From his hit TV reality show The Apprentice, to licensing his name on countless buildings and products, the perception of Trump as a successful businessman and larger-than-life personality was built over many years. This credibility, or at least perceived credibility, was a big part of his electoral success.

Certainly the same cannot be said of Leitch, or even O’Leary. Even the most well-known wealthy people and families in Canada—the Thomsons, Westons, Rogers, Irvings, Desmarais, or McCains—don’t resonate the same way that their counterparts do down south. The last time a famous business person made a (relatively) huge splash on the federal political scene in Canada was Belinda Stronach when she announced her candidacy for Conservative leader in 2004.

Another significant cross-border difference is the incessant coverage from cable news of the presidential election, and Trump’s candidacy in particular. His campaign’s earned media was absolutely enormous, as much as $5-billion worth of free advertising. Whatever news channel you chose or website you clicked on, chances are Trump, or a related story, was the headline.

The contrast in coverage between American and Canadian politics is expansive, as are two other related variables: money and special interests.

The campaigns, parties, and external organizations may have spent billions of dollars to win the White House. That makes the money spent in Canada look like a rounding error: the maximum expenses allowed for the current Conservative leadership race is $5-million, while the spending limit per party during last year’s federal writ period was nearly $55-million for those fielding candidates in every riding.

This, money and its role, is closely connected to the vast reach and influence of special interests and lobbyists in Washington, who often help draft, and have veto-like power over proposed legislation. In turn, this contributes to political gridlock, where cross-party collaboration is akin to sinning, and where constant filibustering is not a misdeed.

The political climate south of the border impedes progress on many issues (and opens the door to political outsiders). Immigration policy, for instance, is one area everyone agrees needs reforming, yet a solution remains elusive. In Canada, by contrast, our parliamentary system, especially when a majority government controls it, introduces, studies, and passes legislation with few—perhaps too few—constraints.

All of this is to say nothing of the deep economic disparities in America, which have been exacerbated and made more pronounced following the 2008 financial crisis (and which Senator Bernie Sanders leveraged to almost secure the Democratic nomination for president).

Yes, economic disparity is an issue in Canada as well, but not to the extent that it is in the United States. Likewise, other hot-button topics like immigration, free trade, crime and terrorism, and race relations do not reverberate the same way here as they do there.

Canada, for example, was the first country to adopt multiculturalism as an official policy in 1971, and today it serves as a model for many nations.

Political personality cults and the role of media and money in Canada are markedly different than in America; special interest groups do not have the same undue influence over policy here; and our system of government, which is not without its own shortcomings, allows for policy progression.

Many things came together, including having an unpopular opponent (Trudeau is no Clinton, by the way), that allowed Trump to win the electoral college, although not the popular vote. Key variables that enabled his political rise are mostly absent in Canada. The ground was fertile for Trump’s message and, as the saying goes: timing is everything.

Can this happen in Canada? Sure. To say never is naive. Can this happen in today’s Canada? Can the same divisive rhetoric Trump employed resonate with more than a sliver of Canadian voters? Far-fetched, at best, so Leitch—or anybody else—should stop trying.

Evan Sotiropoulos is a Toronto-based writer. You can follow him at @evan_sotirop.

‘Negotiations should take as long as they need to,’ says Ellen Gabriel, a former Mohawk spokesperson during the Oka Crisis.

After sitting as a Senator for more than three years, Wanda Thomas Bernard says she is more determined than ever to continue fighting for causes like social justice, diversity, and inclusion.

‘Now that it’s a minority government, they have to listen to everybody,’ says Bloc MP Rhéal Fortin, his party’s justice critic.

Canada already has a free trade agreement with Australia and New Zealand as part of the Comprehensive and Progressive Agreement for Trans-Pacific Partnership (CPTPP).

But public servants say the social impact on workers is not being properly taken into account as the use of artificial intelligence in government advances.
Trending Stories
Would you like to read
this notable, free story?