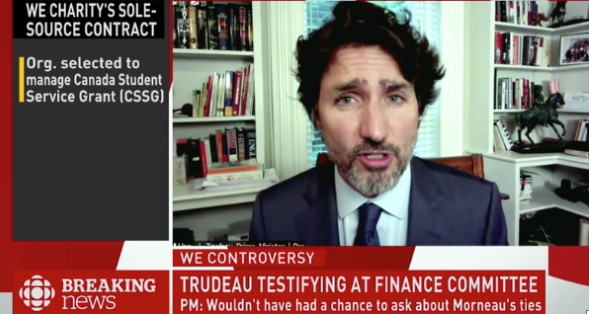 Prime Minister Justin Trudeau's Liberals are losing their political capital because of the WE Charity scandal. Political insiders say the prime minister should bring a senior staffer into his PMO who could 'speak truth to power' and warn Liberals about any potential conflict-of-interest issues going forward. Prime Minister Trudeau, pictured July 30, 2020, at his virtual appearance before the House Finance Committee. Screen capture image courtesy CBC News

The PMO should hire a senior staffer to vet all major political initiatives for ethical problems before they are rolled out, to avoid more of the ethical lapses that have plagued Prime Minister Justin Trudeau’s Liberal government since it won power in 2015, say two veteran political pollsters.