Post COVID-19, the need for Canada to continue its engagement in the Middle East isn’t likely to abate, and the demand for our military expertise won’t fade away either. 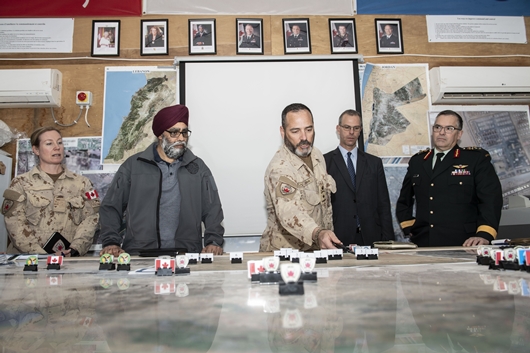 Defence Minister Harjit Sajjan, pictured Jan. 16, 2020, being briefed on the Joint Task Force-IMPACT and the Canadian Armed Forces' presence in the Middle East by JTF-I Commander, Brig.-Gen. Michel-Henri St-Louis during a visit to Camp Canada at Ali Al Salem Air Base in Kuwait. Prior to the onset of COVID-19, some 1,000 Canadian military personnel were serving across the Middle East in various missions in Iraq, the Sinai Peninsula, at Canada’s Operational Support Hub in Kuwait, on several UN assignments and in our embassies. And overall, the security situation they face today is as bad as it ever was, writes Chris Kilford. Photograph courtesy of DND/Cpl. Jerome Lessard

Canada has often found itself involved in the Middle East in one capacity or another. During the Cold War, it was largely to do with defusing conflicts involving our closest allies. The 1956 Suez Crisis, for example, was largely de-escalated by the arrival of a Canadian-led UN peacekeeping force. Tensions over Cyprus resulted in another significant deployment of Canadian peacekeepers in 1964. As the Cold War closed, the focus shifted with Canada taking part in the 1990-91 Persian Gulf War and indirectly supporting the U.S.-led 2003 Iraq invasion.

With Maxime Bernier out of the party, dairy farmers don’t have a supply-management bogeyman to unite against this time.
Trending Stories
Would you like to read
this notable, free story?