It doesn’t take an economist to understand it makes no sense to finance projects at seven to nine per cent when you can do so at two per cent. 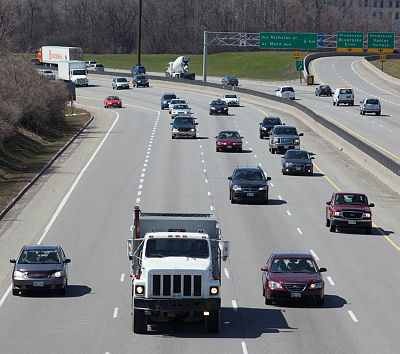 The advisory council is calling on Ottawa to create a Canadian Infrastructure Development Bank and fund it with $40-billion. They suggest this would attract an additional $160-billion from private institutional investors to finance large public infrastructure projects, including toll highways and bridges, high-speed rail, ports, airports, power transmission, public transit, 'smart-city,' broadband, and natural resource infrastructure. The Hill Times photograph by Jake Wright

Finance Minister Bill Morneau’s Advisory Council on Economic Growth makes it look like a match made in heaven. Canada’s public sector has billions in unmet public infrastructure needs while major capital investors have trillions in surplus funds they want to invest to earn stable higher returns.

But in any big-money wedding, someone has to foot the bill. In this case, it will be the public through higher costs, lower revenues, and new user fees.

The advisory council is calling on Ottawa to create a Canadian Infrastructure Development Bank and fund it with $40-billion. They suggest this would attract an additional $160-billion from private institutional investors to finance large public infrastructure projects, including toll highways and bridges, high-speed rail, ports, airports, power transmission, public transit, “smart-city,” broadband, and natural resource infrastructure.

They say the arm’s-length bank should develop a “pipeline of scalable projects with reasonable certainty,” and revenue streams in the form of user fees, availability payments (public funding) and ancillary funding.  It would review infrastructure projects over $100-million and select those with enough revenue potential—the cream of the crop—for private financing and investment.

They also recommend Canada “create a flywheel of investment in its infrastructure by catalyzing the participation of institutional capital in existing assets.”  This simply means privatization, although they lack the courage to use that word, and say it doesn’t necessarily mean outright sale. Private finance could just suck money out with minority ownership. This “flywheel of investment” would become an endless cycle of privatization with private finance cannibalizing our public assets for private profit.

Why are these bad ideas?

There’s no shortage of low-cost public financing available to Canadian governments. Ottawa can now borrow at 0.6 per cent over a year and issue 30-year bonds at 1.8 per cent, with provinces a percentage point higher.  Long-term borrowing rates have never been this low.

Meanwhile, large private infrastructure investors expect “stable, predictable returns in the 7 to 9 per cent range,” according to Michael Sabia who is CEO of Quebec’s Caisse de dépôts pension fund and a member of Morneau’s economic advisory council. This is why he and other major investors are heavily pressuring Canadian governments to include private finance in the hundreds of billions they’re investing in public infrastructure.

It doesn’t take an economist to understand it makes no sense to finance projects at seven to nine per cent when you can do so at two per cent. Financing at two per cent for a $100-million project amortized over 30 years adds $34-million to its cost, while eight per cent adds $165-million: almost five times as much in financing costs and doubling the total cost, including the principal.

No sensible person would do this with their own mortgage, nor do so in an obvious way with other peoples’ money (OPM) as a politician. That’s why they dress these projects up as public-private partnerships, or “innovative infrastructure financing,” as the Advisory Council proposes with this bank.

The public will always ultimately pay for these higher private financing costs through ongoing public subsidies, lower public revenues, higher user fees and in other ways.

Privatization doesn’t just increase costs, it also results in greater inequality, as user fees are hiked, workers’ wages and benefits are cut, and executive compensation rises.  This would severely undermine the Trudeau government’s commitment to support the middle class and reduce inequalities.

It’s unlikely governments would benefit from higher corporate tax revenues, as many projects would be owned by foreign investors and based in tax havens. Foreign ownership also leaves our governments vulnerable to being sued through controversial Investor State Dispute Settlement provisions in trade deals such as NAFTA, CETA and the TPP.

University of Toronto expert Matti Siemiatycki has made much more constructive proposals for a national infrastructure bank that would reduce rather than increase the cost of financing for public infrastructure and increase accountability and transparency over these decisions.

How the Trudeau government responds to these recommendations will be a moment of truth. Will they bend to the interests of private finance or genuinely adopt policies for “inclusive growth” in the interests of all Canadians?

Toby Sanger is the senior economist for the Canadian Union of Public Employees.