Demonstrators in Ottawa took to the streets on Feb. 7, 2020, in solidarity with the Wet'suwet'en hereditary chiefs, demanding the RCMP pull back from the First Nation's territory. The Hill Times photograph by Andrew Meade

News|By Beatrice Paez
'We have to move beyond public platitudes and eloquent statements; we need a reality whereby Indigenous law and institutions are placed on the same level as common law,' says Grand Chief Stewart Phillip.
Latest News

‘Negotiations should take as long as they need to,’ says Ellen Gabriel, a former Mohawk spokesperson during the Oka Crisis.

After sitting as a Senator for more than three years, Wanda Thomas Bernard says she is more determined than ever to continue fighting for causes like social justice, diversity, and inclusion.

‘Now that it’s a minority government, they have to listen to everybody,’ says Bloc MP Rhéal Fortin, his party’s justice critic.

Canada already has a free trade agreement with Australia and New Zealand as part of the Comprehensive and Progressive Agreement for Trans-Pacific Partnership (CPTPP).

But public servants say the social impact on workers is not being properly taken into account as the use of artificial intelligence in government advances.

Demonstrators in Ottawa took to the streets on Feb. 7, 2020, in solidarity with the Wet'suwet'en hereditary chiefs, demanding the RCMP pull back from the First Nation's territory. The Hill Times photograph by Andrew Meade

News|By Beatrice Paez
'We have to move beyond public platitudes and eloquent statements; we need a reality whereby Indigenous law and institutions are placed on the same level as common law,' says Grand Chief Stewart Phillip.
Politics

Canada may be facing its biggest test in a generation

The province is in debt, its population is aging, and the once-strong fishery is a shadow of itself. The picturesque Newfoundland and Labrador of those television ads is in trouble.

Political rumbles on the horizon for Newfoundland and Labrador

While the Liberals sort out their leadership, the Progressive Conservative Party of Newfoundland and Labrador is not beyond its own political theatrics.
Legislation

Senate Conservative leader Don Plett says the changes are ‘ridiculous,’ but ISG Senators Murray Sinclair and Pierre Dalphond say there needs to be a path to a vote on bills after 15 died in the last Parliament.

The government says each status application could take between six months and two years, which advocates call an 'appalling' delay to deal with state-sponsored discrimination.

NDP MP Daniel Blaikie says it's worth taking 'a little extra time' to understand the 'full implications' of the new NAFTA, as well as to look at how Canada can improve its internal international trade process.
Foreign Policy

Canada can look to Japan as ‘bridge-builder’ in the Asia Pacific, envoy says

Prime Minister Justin Trudeau would better display Canada’s worthiness for a UN Security Council seat by action to back the body's efforts to put some teeth in nuclear disarmament.

China’s effort to fight the epidemic is in our own interests, as well as in the interests of the world. Therefore, supporting and helping China means safeguarding those common interests.

Canada has not been good to Africa and goes to the continent with either its hands out, or its fingers waving, as Trudeau has been wont to do with African countries.
Lobbying

'If you want to advance a file, it’s no longer enough for the governing party to be onside,' says Yaroslav Baran of Earnscliffe Strategy Group. 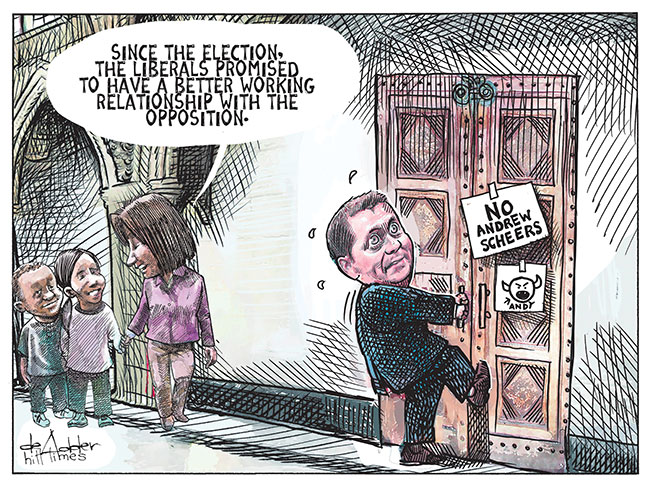 Read all about it: Digital Government Minister Murray’s team so far

Feature|By Laura Ryckewaert
Plus, Hill Climbers takes a look at International Development Minister Karina Gould’s office, where Hanna Button has stayed on as director of policy.

Plus, Rob Russo is soon to be honoured with public policy journalism award, and Jane Philpott has been unveiled as Queen's University new health sciences dean.

Plus, there are more staffing changes to note in the Prime Minister’s Office, including the exit of Elyse Surette-DiMuzio, who’s now working for the Pete for America campaign south of the border.
Policy

Fighting climate change together takes action on all fronts

Opinion|By Mary Ann Yule
Looking at the statistics about the path of our planet can be daunting, and sometimes downright deflating. To reverse course in the decade ahead, we must begin working together.

News|By Laura Ryckewaert
On Feb. 4, the Federal Court of Appeal struck down one Indigenous-led challenge of the Trans Mountain expansion project’s re-approval, but the pushback continues.

News|By Neil Moss
Canada currently has 120 Canadian Force members deployed to Africa, down from 427 members that were deployed to the continent during Canada's contribution to the UN peacekeeping mission in Mali.

Privacy and data should be a top priority for ‘energetic’ Innovation Minister Bains, say experts

The federal government should be prioritizing data and privacy issues, given the increased global focus on the subject, says MaRS Discovery District's Cory Mulvihill.

A modest proposal for the assisted demise of democracy

For which babies boiled and fricasseed provide both inspiration and a cautionary tale. With thanks and apologies to J. Swift.
Insider's Guide

Prime Minister Justin Trudeau, pictured Jan. 17, 2020, with David Morrison, his defence policy adviser, shortly before holding a press conference and an update at the National Press Theatre on the downing of Flight PS752 tragedy. The Hill Times photograph by Andrew Meade

Feature
This year’s Top 100 Most Influential List reflects the power brokers who will help shape the terms of how this minority Parliament will shake out.
Democracy, a delicate balance
Opinion|Richard Wagner

The return of Parliament is more than an event in the news cycle. It’s a time to look ahead, and to thoughtfully consider the important role each branch of government will play in that future, and in the life of each individual Canadian.
Isolation: engaging Canadians in a changing world
Opinion|David Coletto

Our worldview, our desire for control, and the way we get information are just three things that new MPs should consider as they orient themselves to life in Ottawa and as elected representatives. But the implications of these three forces matter to everyone who seeks to engage and connect with Canadians.
Letters to the Editor

More support should be given to electric buses

Trump’s peace plan for the Middle East should be rejected, says NGO

Include all segments of the Indigenous population when allocating registration resources, says advocate

Don’t look to the past for way forward on new Canadian peace centre, says reader

Reporters and reconciliation are strange targets for Liberal indifference

Don’t tear down any heritage buildings on Wellington Street

Time to make better use of the cameras covering the House

Inside 2020 Books – Inside Ottawa and Inside Canada

Guide to Using Social and Digital Tools in Election...

Charting the CBC’s challenging present and... 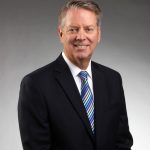 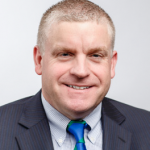 Politics This Morning: Blair says RCMP offer to leave should pave way for end to blockades

By Beatrice Paez
Plus, the PM plans to convene the incident response group to discuss the string of issues—coronavirus, the blockades, and the downing of Flight 752—that have been competing for the government's attention in recent weeks.

The Japanese planners were foolish to put four reactors on the coast in a region where earthquakes and consequent tsunamis were to be expected from time to time.
Opinion|Scott Taylor
Let Khadr speak on the victimization of child soldiers, a subject he knows well

Lost in the powerful emotion of hate is the fact that Omar Khadr was just 15 years old at the time he was captured by U.S. Special Forces in Afghanistan.
Opinion|Alex Marland
How do political parties get politicians to stay on message?

How can Canadian politicians navigate party discipline? That was the theme of a well-attended public forum held in St. John’s on Feb. 6. Sponsored by the Royal Society of Canada (Atlantic) and MUN.
Opinion|Jay Ritchlin
Canada must gear up action for nature and climate

Part of the challenge is that outside of agriculture circles, agriculture and innovation aren’t routinely talked about in tandem, particularly in the context of delivering broader public benefits.
Opinion|Independent Senator Mary Coyle
Canadians need to come together to meet net-zero carbon emissions targets

As time passes, we inch closer and closer to irreversible damage. There is a need to act now and to take bold steps in addressing this crisis.

‘Government can do so much by doing less’: Desmond Cole on shedding discomfiting light on systemic injustices

'When Black or Indigenous or other people of colour get into the political system, it always assumed it’s they who must carry this change for the rest of us,' says journalist and activist Desmond Cole.
Feature|Kate Malloy

Mark Bourrie talks about his book, Bush Runner: The Adventures of Pierre-Esprit Radisson.
The Hill Times in print

Your email has been added. An email has been sent to your address, please click the link inside of it to confirm your subscription.
Hill Climbers
Feature|Laura Ryckewaert

Plus, MPs celebrate Robbie Burns Night on the Hill, and Ambassador Dominic Barton to appear before the Canada-China Committee.
Civil Circles
News|Mike Lapointe

The Conservative opposition motion condemning the decision made by the Parole Board of Canada that led to Marylène Lévesque death passed unanimously in the House on Feb. 5.
News|Mike Lapointe

‘Job action only way to get this government to move,’ says union president, as CRA members head to strike votes

‘If we have a strike mandate in early April and we’re in tax season and they don’t wake up and smell the coffee … guess what’s going to happen,’ says Union of Taxation Employees president Marc Brière.
Party Central
Feature|Aidan Chamandy

The snow was blowing outside, but the whisky was flowing inside.
Feature|Aidan Chamandy

A China expert says he’s concerned Taiwan's January election could prompt a shift in approach from China, with some pointing to tensions in Hong Kong as an example.
Feature|Samantha Wright Allen

Foreign Minister François-Philippe Champagne will talk about Canada’s foreign policy at a Feb. 21 event hosted by the Montreal Council on Foreign Relations. The Hill Times photograph by Andrew Meade
Photo of the day

Protesters demonstrate in Ottawa in support of the Wet'suwet'en Nation.
The Hill Times photograph by Andrew Meade
From The Hill Times' Photo Archives

Politicos gather at the Met for post-Throne Speech bash