The biggest political challenge here is for Andrew Scheer, who is being overshadowed by Doug Ford in Ontario, says Shane Mackenzie, a former Liberal staffer. 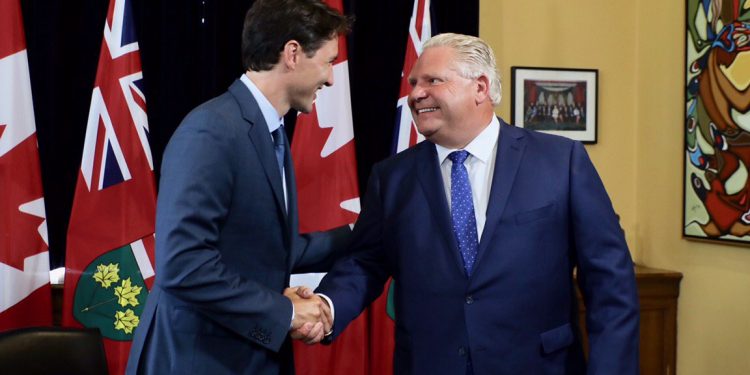 Prime Minister Justin Trudeau and Ontario Premier Doug Ford are at odds over the feds' carbon-pricing regime, which Ottawa is prepared to impose on the province following Mr. Ford's decision to repeal the province's cap-and-trade system. Photograph courtesy of Justin Trudeau's Twitter

Ontario Premier Doug Ford’s fight with the feds over the carbon tax delivers the Trudeau government the kind of political opposition that could work to its favour, say some Liberal- and NDP-connected politicos, while some Tory insiders say that the growing provincial opposition will help strengthen the Conservatives’ appeal federally.

Energy
Short and informative analyses on policy challenges that bring background and recommendations to policymakers, journalists and the general public.

‘It is going to blow a hole in the government’s legislative agenda,’ says Liberal MP John McKay.

The COVID-19 pandemic is the 'defining moment of Justin Trudeau's prime ministership' and this is a crisis where the government has a central role to play in its management.
Trending Stories
Would you like to read
this notable, free story?