A betting person might reasonably wager that Justin Trudeau will not want to open another front in the pipeline wars between now and the 2019 election. And that probably makes Quebec Premier Philippe Couillard, who could be facing an uphill re-election battle in less than two years, a collateral winner of this week's developments. 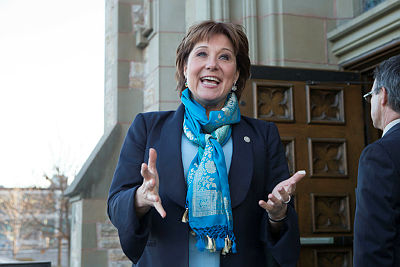 B.C. Premier Christy Clark will be campaigning for re-election in the spring. If she supports Trudeau's move, it will be her provincial Liberals who will first test the post-announcement waters. She could be in for a choppy crossing, writes Chantal Hébert. The Hill Times photograph by Jake Wright

MONTREAL—It is a rare government decision that involves a lot of predictable political pain for little obvious electoral gain. For better or for worse, the approval by Prime Minister Justin Trudeau of the controversial Trans Mountain pipeline falls into that category.

It is unlikely to win him supporters within the ranks of those who most support the pipeline agenda. They tend to be spoken for by the Conservative party and, for the most part, have no appetite for Trudeau’s proactive climate-change agenda.

On the other hand, at least some of the seats of the 17 Liberal MPs elected in B.C. in the last election could be on the line. The approval of this pipeline plan will not sit well with many of the constituents. Even if he wanted to, Trudeau could not get all his caucus members to sing the same song on this issue. A handful of them have already broken ranks with his decision.

The Liberals are not the only ones potentially at risk on what is probably Canada’s most contentious front these days.

Take British Columbia Premier Christy Clark. She will be campaigning for re-election in the spring. If she supports Trudeau’s move, it will be her provincial Liberals who will first test the post-announcement waters. She could be in for a choppy crossing.

There is a widespread expectation on Parliament Hill that Clark will at some point publicly sign off on the Trans Mountain project. The federal government has been playing nice with its B.C. counterpart, delivering a much-wanted green light for a major liquefied gas development and promising billions of federal dollars to improve marine safety.

But Clark would not be the political survivor that she is if she did not have a well-honed instinct for self-preservation. B.C. elections are won or lost in the greater Vancouver area, the site of the pipeline whose capacity to carry bitumen oil to the coast Kinder Morgan plans to expand.

On Wednesday, she said Trudeau was close to meeting all of her conditions for supporting the pipeline. She invited the prime minister to come to B.C. to sell the decision. By all indications, she wants to see how it all plays out before taking a definitive stance.

Then there is the NDP. While Alberta Premier Rachel Notley was celebrating a big win alongside Trudeau on Tuesday, Thomas Mulcair was calling the federal decision a betrayal of the trust many B.C. voters placed in the prime minister.

The B.C. New Democrats are also critical of the federal decision.

The cracks between the ruling NDP in Edmonton and their opposition cousins in Parliament and in Victoria are becoming too wide to be papered over.

Whoever succeeds Mulcair will be hard-pressed to square the pipeline circle.
In any event, as of now, Trudeau and Notley are joined at the hip. On Nov. 29, the prime minister argued it was the premier’s determination to rein in Alberta’s carbon emissions that made his approval of a pipeline consistent with Canada’s climate change commitments.

But if she fails to win re-election, the quid pro quo is unlikely to survive her NDP government, leaving Trudeau with little to show on climate change for having delivered a pipeline from tidewater to Alberta.

Had the prime minister vetoed the Kinder Morgan project, he might as well have declared a moratorium on any plan to bring more of Alberta’s bitumen oil to the Canadian coasts.

There is no way Trudeau could have killed two pipelines to the Pacific Coast (Northern Gateway and Trans Mountain) and then backed the no less controversial Energy East project. (Punting the decision on the Vancouver area pipeline would most likely only have hardened opposition to the plan.)

That being said, it might be prudent for TransCanada—the company behind the plan to link the oilfields to the Atlantic Coast through the Prairies and Central Canada—to not take this week’s federal ‘yes’ to Kinder Morgan as a sign that its pipeline will be good to go any time soon, if at all.

A betting person might reasonably wager that Trudeau will not want to open another front in the pipeline wars between now and the 2019 election. And that probably makes Quebec Premier Philippe Couillard, who could be facing an uphill re-election battle in less than two years, a collateral winner of this week’s developments.

Chantal Hébert is a national affairs writer for The Toronto Star. This column was released on Dec. 1.